HEREDIA FOOLED THEM ONCE AND SAID HE CAN DO IT AGAIN, SO JUST HOW MUCH HAS HE HELPED MARQUEZ? 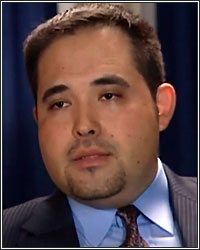 During two separate conference calls held last week to promote this weekend's anticipated showdown between Manny Pacquiao and Juan Manuel Marquez, promoter Bob Arum informed the media that they were "behind the times" before proceeding to flex his knowledge on performance enhancing drugs. "Wake up and see what these conditioners are saying. They are using natural and totally legal supplements and using state-of-the-art conditioning methods. Not because of anything other than the fact there have been advancements in the legal methods. The steroid problem is fading into the past," Arum boldly poclaimed. At first, I laughed at his comments, thinking that the notion of steroids being a thing of the past seemed rather ridiculous considering that, just days before Arum's proclamation, a drug investigation into a YMCA in Lebanon, Ohio revealed a massive nationwide steroid ring and busted a secret anabolic steroids lab in Tennessee, leading to the indictment of 32 people. Although Arum must have missed those headlines, little did I know just how right he was regarding steroids and the advancements that have been made in the past 5 to 10 years. Enter Angel Memo Heredia, graduate of Texas A&M University and an admitted steroid dealer, who in the past has eschewed the use of steroids in favor of more modern performance enhancing drugs that he referred to as "the main stuff": growth hormone, insulin, EPO, and IGF-1.

To be fair, Heredia maintains that his past is exactly that, just the past. "I've never been banned from coaching. I have the curriculum. I have the science degrees. What we're doing is strictly science," Heredia would comment, defending himself to those who questioned his controversial past during the latest episode of HBO's 24/7 series. That being said, the scientific knowledge that he's accumulated over the years regarding performance enhancing drugs is quite impressive. The son of a chemist, Heredia spent years honing his own knowledge of chemistry, with his family's company, Chopo Laboratory in Mexico City, Mexico, at his disposal. In 2008, following his involvement as a government witness in the BALCO scandal, Heredia granted an in-depth interview to Der Spiegel, a German weekly news magazine, which also happens to be one of Europe's largest publications, giving explicit details on his involvement with and knowledge of performance enhancing drugs and how he got away with beating the testing system. Although the online version is in German, with the help of Google, we we're able to translate it to come up with some rather interesting quotes from Heredia. Here are just a few of the many gems taken from the interview:

Exactly how much help Angel Memo Heredia has been to Juan Manuel Marquez remains to be seen, but judging from the lightweight king's physique and own comments, he definitely appears to be in the best condition he's ever been in. Pacquiao's own strength and conditioning coach, Alex Ariza, doesn't seem to be worried at all about the presence of Heredia in Marquez's corner, even challenging him to a winner-take-all bet that Pacquiao will knockout Marquez. If it were me, however, that interview alone would be enough to make me at least somewhat concerned about the knowledge that Heredia may be imparting onto Marquez. If that wasn't enough, just take a look at the following German documentary titled "Die Doping-Drahtzieher Der Leichtathletik" ("The masterminds of the doping Athletics") and witness Heredia himself giving an instructional on how to inject EPO and how to create a testosterone gel that absorbs through the skin and enters the bloodstream: So you tell me, just how much of a factor has Angel Memo Heredia been in helping Juan Manuel Marquez prepare for Manny Pacquiao? In just a couple more days, we'll soon find out.