DAME DASH: "BOXERS AND RAPPERS ARE A LOT ALIKE" 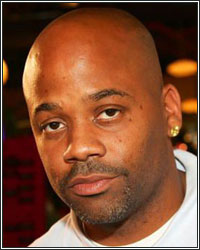 "Boxers and rappers are a lot alike. There is the skills to it, but they like being on that stage. The thing about boxing is it's not a team sport. You have your coaches and shit, but at the end of the day, it's just you and that person and if you slippin', you gonna get knocked out. So I don't knowI just love the sport of boxing, you know what I mean? I like the caginess of it; a lot of it is about skill and a lot of it is about heart. I like Berto because he fights. I like fighters. I think a win is when you fight, not when you win I'm about to do this Black N Blu TV with my man Damian, so we gonna do a network for boxing," state former hip hop mogul and entrepreneur Dame Dash, who talked about his love for the sport of boxing. In fact, Dash informed us that he will soon be launching his own boxing network, so check out what else he had to say!

PC: How have you been man?

DD: Everything is everything. I can't complain.

PC: A lot of fans think when they see celebrities at fights that they are there as a social outing. You are a huge boxing fan. How did you get into the sport?

DD: I used to talk a lot of shit when I have been boxing since I was about 12.

PC: When you used to box, what style did you have?

DD: It depended on who I was fighting and what division I was in. If I was catching somebody that was moving around, I was cutting the ring off, and if I was catching someone that was stationary, I could move around and get on my bike. Sometimes I would drop my left real low so I could catch a nigga slippin', or sometimes I get my hands up. I try to go from Joe Louis to Muhammad Ali real quick. It all depends and you gotta be able to adjust. Plus you gotta be smart. I mean, I'm in my 40's now, but before when I was doing it.

PC: I know Floyd Mayweather was your dude at one point, and maybe you guys are still cool, but he's one of those fighters where you either love him or hate him. What are your thoughts on Floyd?

DD: I think Floyd is the best thing for boxing right now. He brings personality and he remains quick, even in his mid-30's, unlike a lot of other fighters. He's strategical with who he's fighting, but if he leaves the game, the game is going to be fucked up, so you gotta love him for that. I know what that is. He knows how to keep people's attention. All I know is when Floyd came to me, he had a list of motherfuckers he was gonna beat up and he beat up every single one of them besides Kostya Tszyu, because Kostya Tszyu retired, so I gotta respect him for that. I think he is going to maintain people having an interest in him by fighting for himself as opposed to fighting for other people.

PC: If the fight between Mayweather and Manny Pacquiao ever happens, who do you lean towards?

DD: I'm going to always lean towards Floyd because that's my man and I've never seen him lose. He's a mathematician in the ring. I think people think that he just has natural ability, which he does, but they don't understand how much he studies, and I don't know if people really respect how hard he trains. I've been around Floyd in social situations when we were going to clubs and stuff and he would be like, "Hold on, let me go run 5 miles," and he wasn't even fighting. He'd just go ahead and gut it. I don't think people understand; he's never out of shape.

PC: What other fighters are you feeling right now?

DD: Who am I feeling right now?

DD: On the come up or

PC: Anyone. They could have been in the game for a minute or on the come up.

DD: For me, fighting is more than just about skill. It's about your heart, you know what I mean? I tend to like those fighters, like I like Cotto because he fights whoever they put in front of him. I don't see him being so strategic about his fights. I'm not mad at Pacquiao because he beat niggaz up from every weight division. I think he gets busy. I respect the fact that whatever weight class he fights at, he's going to come at you and do what he needs to do. I'm trying to think who else I like. I'm rooting for Winky because I always see Winky and I've always appreciated his chess. I'm a fight fan and I respect his chess game and how he mathematically breaks people down. Who else do I like?

PC: Are you an Andre Ward fan?

DD: I like Andre Ward. I wanna see him fight some other people though, but I was definitely impressed by how he has been manhandling people. I'm not mad at him, but I want to see him get in there and fight like a Sergio Martinez or someone like that. I fucks with Sergio Martinez because he stretches motherfuckers. I can't be mad at that. He puts your lights out, so I can't really be mad at that. I like him. I like them all, you know. I'm curious to see howwho is Pacquiao fighting againwhat's that dudes name?

DD: Yeah, I like Timothy Bradley and how he blasted out Casamayor with the solar plex punch. I became somewhat of a fan of his that day when he fought Casamayor. I'm curious to see what he's going to do against Pacquiao, so I'm excited for that fight. I like Paul Williams because he's got heart. I want to see him fight at 147, but I know no one will fight him there. But I like the fact the he'll keep moving up to fight at whatever weight. I always respect a fighter that will go out of his weight class, or when he beats everybody up in his weight class, he moves up and goes up, and I can never be mad at that, you know what I mean?

PC: For sure. You know the fight game for sure. You were heavily vested in boxing at one point. What made you step back from it?

DD: Well, I have passion for it. I don't do it for money, and sometimes, certain people were doing things and it was about money and I wanted to remain a fan of the sport. So the fighters I was in business with, I still talk to them and I'm still a fan, but as far as being a promoter, I don't think it's a good business. You can invest a lot in a fighter and they can walk away at any time. I don't be doing all that, man. That's not what I was really in it for, you know what I mean? As a business, it's not the best business. Also, a business scenario when you're in boxing, you're around a bunch of dudes and I don't be wanting to be around dudes all day. You deal with all of the egos and shit, and the boxing business, you deal with these guys that used to be a fighter, so they got that chip on their shoulder and everyone knows how to fight; all of that shit with the egos and drama. So again, I wanted to keep it pure and be a fan and do it like that. That's why I don't go to the fights as much. I just watch them and I don't be wanting to be bothered. I just really want to watch the fight.

PC: You just made some interesting points and it reminds me a lot of the rap game; everyone used to rap or do this or that in music. Being in both, do you see the parallels in both boxing and music?

DD: Well, boxers and rappers are a lot alike. There is the skills to it, but they like being on that stage. The thing about boxing is it's not a team sport. You have your coaches and shit, but at the end of the day, it's just you and that person and if you slippin', you gonna get knocked out. So I don't knowI just love the sport of boxing, you know what I mean? I like the caginess of it; a lot of it is about skill and a lot of it is about heart. I like Berto because he fights. I like fighters. I think a win is when you fight, not when you win. Even if you lose, if you laid it all out there and you fight until you get knocked the fuck out or you knock something out and go hard every single round, I respect that. So any fighter that has heart that can fight more than 3 or 4 rounds, like Berto, I feel like he swings and he goes hard and if he's gonna lose, he's gonna lose leaving it in the ring. I wanna see how that injury affects him, but I'm rooting for him.

DD: In the music business, I've been on my rock n' roll shit lately; my live instrumentation. I'm 41 years old, so it's hard for me to really listen to something that a 15-25 year old is saying so much, so I've been on my live instrumentation, like a band or some rock n' roll. Or if I do rap, I do it with some rock n' roll. I'll mix some Black Keys with fucking Mos Def and RZA or some shit. I like the interesting things, not the things that are more formal. I don't listen to the radio too much. I don't really like it. I've been to them shows and it's like, "Whatever." You know what I mean? So it's like that.

PC: I got you. Well it's been a privilege speaking to you. I've followed your career for quite some time. I appreciate your time. Is there anything you want to say before I let you go? Let people know what you got going on.

DD: If you wanna check out what I'm doing, go to www.dd172.tv. I'm about to launch a television network and you can check it out at www.dd172.tv. All of that is there and you can see everything I been doing. You can see everything I've been doing for the last 3 years. I been going to Hong Kong and running around different parts of the world and opening up art galleries and shit like that. I'm about to do this Black N Blu TV with my man Damian, so we gonna do a network for boxing. I been kicking it with my man Gus; me and him used to box years ago. Now he is like the number one sportscaster. We used to go hard, so I respect him a lot. I like the game. Go check out www.dd172.tv and just let it play; you will see everything.