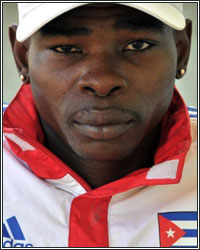 A frustrated World Boxing Association ("WBA") Super Bantamweight Champion Guillermo "El Chacal" Rigondeaux (10-0, 8 KOs), upon learning that Nonito Donaire plans to move up to the featherweight division after his next fight, has labeled Donaire, "The Filipino Phony."

"Donaire is running scared of any super bantamweights with power," Rigondeaux said from his Miami training camp. "He hasn't knocked out anybody at 122 pounds. One thing is for sure, though, he will get knocked out if he has the guts to fight me."

Rigondeaux trained at Wild Card Gym with one of his favorite fighters, Manny Pacquiao, who may be wondering at this point exactly why his fellow countryman, Donaire, doesn't fight Rigondeaux to determine the contemporary King of the Super Bantamweights.

"Manny fought the best fighters around when he was moving up through weight classes but this phony, Donaire, is disappointing fans all over the world, especially Filipino people, by running scared from the best fighter at 122 pounds," Rigondeaux continued. "I competed against more than 250 amateur boxers from every continent and none of those guys were paid to fight me. 'The Filipino Phony' will be paid a king's ransom to fight me, but he's scared enough to move up to 126 just to avoid fighting me. The problem he faces, though, is I will also move up to featherweight once I've cleaned out the super bantamweight division. What's he going to do then, move up to super featherweight?"

Arguably the greatest amateur boxer of all-time, Rigo is a two-time Olympic Gold Medalist, as well as a 7-time Cuban national champion who captured a pair of World Championship titles during his incredible amateur career.

"It's beyond belief that the so-called No. 3 pound-for-pound fighter in the world is scared to fight Rigo," Rigondeaux's manager Gary Hyde added. "There can be no doubt in anyone's mind that this is what's happening now with Donaire. When a member of our team, Paddy Cronan, approached Donaire at Rigo's June 9th fight to ask him if he would step-up to the plate and fight Rigondeaux, Donaire clearly indicated that he had no intention of fighting Rigo."

A lethal puncher, particularly to the body, Rigondeaux looked sensational in his most recent fight last month against Teon Kennedy (17-1-2), who was decked five times before the fight was mercifully stopped in the fifth round.

Rigondeaux, a savvy southpaw, is trained by Cuban coach Jorge Rubio and working with conditioning coach DJ Montanocordoba. Rigondeaux's promotional contract with Top Rank expires July 15 and discussions are ongoing with Hyde and Rigondeaux's team to determine what path to take from here on.