AUSTIN TROUT: "I'M IN IT TO WIN IT, KEEP MY UNDEFEATED RECORD, AND KEEP MY BELT" 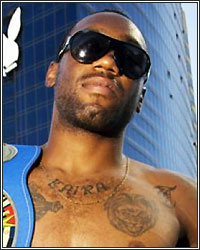 "I'm just letting people know I truly believe I can win this fight. People are saying things, that it's about the payday, but this is about the opportunity. This opportunity is way bigger for me than the payday. I'm not making as much as Cotto by any means. I feel I've been respectful, and I respect Cotto greatly, but when the bell rings, the respect kind of goes out the window. I'm in it to win it, keep my undefeated record, and keep my belt," stated regular WBA jr. middleweight champion Austin Trout, who talked more about his upcoming December 1 showdown with former champion Miguel Cotto. Check it out!

DK: What's going on, Champ? Thanks for taking the time to speak with us.

DK: First off, I'd like to get your thoughts on the passing of Emanuel Steward. The entire boxing world is shaken by this one.

AT: Yeah. You know, we definitely lost an icon in the game. My heart and prayers go to his family, students, and friends.

DK: Tell us how training camp is going so far?

AT: It's going good. I'm feeling sharp and looking sharp. Wind is good. Weight is good. Everything is on point and on schedule.

DK: This is undoubtedly the biggest fight of your career against boxing's #3 most popular draw in terms of revenue. You seem to be handling the pressure okay so far.

AT: Well, this is what I've been waiting for. The pressure is nothing I didn't expect, and I'm very excited to go in there and prove I belong there with the elite.

DK: You've been doing a little more talking than we are used to seeing out of you. Is there a particular reason for that?

AT: Well, you know, I don't feel like I'm talking crap. I'm just letting people know I truly believe I can win this fight. People are saying things, that it's about the payday, but this is about the opportunity. This opportunity is way bigger for me than the payday. I'm not making as much as Cotto by any means. I feel I've been respectful, and I respect Cotto greatly, but when the bell rings, the respect kind of goes out the window. I'm in it to win it, keep my undefeated record, and keep my belt.

DK: I notice you're not only trying to get ready for the fight with Miguel Cotto, but you seem to want to make sure that the casual boxing fan knows your name before you get into the ring December 1st. You had a very successful debut as an analyst on Showtime at the Barclays fight card.

DK: Is announcing something you would like to pursue after boxing?

DK: Having you announce that fight in New York City when your fight is going to take place at Madison Square Garden was a brilliant move by Showtime, in my opinion at least, to put you on the air. Was that your idea, or did Showtime ask you to be a guest commentator to help promote the fight?

AT: Every time I would see Stephen Espinoza, I would throw it out to him and I said I would love do it, but I'm not sure who brought it to whose attention. Whether they asked Al about it or whether Al brought it up to them, I'm not sure, but I'm happy it happened and it was great.

DK: I'm glad you brought up Al Haymon's name. Briefly talk about what it has meant to have Al as your advisor now. I know you didn't know what direction he was planning on going with you, but he told you that he was working on some big things. Once again, he delivered for one of his fighters. How important has the addition of Haymon been to you and your team?

AT: Well, he has been very important. At the rate I was going, I was going to have to do the Marvin Hagler way, where I fight everyone before getting a superstar. With Al Haymon, he's gotten me on TV and he's building me as a superstar. The thing is, he'll lead us to water, but he can't make us drink. It's up to us to make the rest happen.

DK: Well, you did a great job and I'm sure you'll be back on the network in an announcing role again. But let's get back to the fight with Cotto. Obviously, everyone knows what Cotto brings to the table. A lot of boxing people, at least that I've spoken to, give you an excellent chance in the fight even though you're a heavy underdog. Is being the world champion and still being the underdog a motivating factor for you?

AT: I feel like I'm still in the proving stage. I need to prove I'm champ for a reason. I feel like I need to prove I'm undefeated for a reason. I'm gonna be an undefeated champion for a long time. Being an underdog is motivation for me to win, but being in the Garden is also motivation for me. That's Cotto's backyard and the cheers are going to be for him. But in the end, I hope those cheers are going to be for me. I hope the fan base accepts me as the world champion because I'm not just a world champion, I'm their champion too. I'm the world champion and I represent the world. I fight for the fans across the world and that includes New York City.

DK: What does Cotto bring to the table that may present problems for you?

AT: His experience. He has a good jab. Working with Pedro Diaz, his footwork has gotten better. He throws good combinations. He has good speed. We're working on things to neutralize those parts of his game. At the end of the day, I believe it's going to be a fight.

DK: What does Austin Trout bring to the table, and why will he upset Miguel Cotto on December 1st?

AT: I don't think they thought I was as big as I am. I don't wanna say they're underestimating me because Cotto always trains hard for everyone, but when they took the fight, they might have been. I believe my footwork is superior, I will use my reach, I have a good jab as well, and I believe I'm stronger than they think.

DK: Champ, I know you're a busy man and I appreciate you taking the time out of your busy training schedule to give us an interview at FightHype. Hopefully we can have you back on at least one more time before fight night. Is there anything you'd like to say to the fans?

AT: Just tune in December 1st, whether you're going for me or against me. I hope after the fight, everyone is going for me because I promise I'm going to fight very hard and it will be an entertaining fight. I'll always represent as your world champion because I'm your world champion. I promise I'll always fight hard every fight to be a legend and will give a great effort every time out for all the fans.