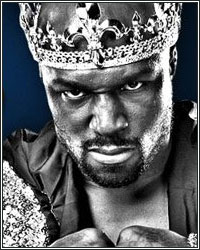 "Pro wrestling training is harder than MMA training. Just look at the gruesome injuries you see in pro wrestling as opposed to MMA. That shit is real, man. You don't see many compound fractures in MMA like you do in pro wrestling...Wrestling training is going good. I think I am getting better. I gotta go back to OVW. That's a great wrestling school. OVW is where all of the top wrestlers came from. Randy Orton, John Cena, Brock Lesnar, Kurt Angle, and so on came from there. CM Punk came from OVW, so OVW put out stars. So just to have the chance to go out there and work with some of the guys that's teaching me things...I can't wait to go back," stated Bellator light heavyweight King Mo Lawal, who talked about how his pro wrestling training has been going as he prepares to head to Holland to get back to MMA training. Check it out!

PC: How is everything going my man?

KM: Everything is going good, man. I just got back from Louisville, Kentucky. I'm back in Cali now before I head to Holland.

PC: You have gone from Cali to Kentucky to Missouri, for Invicta, and then Arizona for Bound for Glory and then back to Kentucky and finally home. How are you feeling physically and mentally with this busy travel schedule you have had?

KM: Actually, me traveling has been good for me. People don't understand, they want to say MMA and MMA, but motherfucking pro wrestling training is harder than MMA training. Just look at the gruesome injuries you see in pro wrestling as opposed to MMA. That shit is real, man. You don't see many compound fractures in MMA like you do in pro wrestling. All you gotta do is YouTube Sid Vicious leg break. Man, you see all kinds of crazy shit in pro wrestling.

PC: I remember you telling me how sore you were after your first week.

KM: It was surprising to me and it made me question could I handle this. I was talking to Bully Ray and he was telling me they get peoplehe was like, "Mo, I have had fighters come through, football players come through, and they will train hard for a week or two and after that, they are done. They never come back." That shit is not easy, and for all of the people out there that think it is, they should go and try to take a bump. The funny thing is when Spike TV came down just to look around and they were filming, I asked the film guy to take a bump real quick. He couldn't do it. He was like, "Man, this is so hard, I can't do it." So he ended up doing a soft one and the next day, he was sore. He was like, "The whole back of my neck is sore." That's what people don't understand is this shit is not easy, and if it was easy, there would be more people making it in the wrestling business.

PC: What was the atmosphere like at Bound for Glory, and how were you handling everything, because you had to officiate the craziest match of the night?

KM: Man, let me tell you something, I was nervous as hell dog. I didn't know what to do. I'm so used to MMA shit and amateur wrestling, and this was so different, man. I was sitting there like, "Man, what the fuck is going on? I'm nervous, sweating, and my mouth all dry and shit." And then, when the match happened, I was like, "Man, what the fuck did I get myself into. This shit is crazy, man." They were bleeding and shit, falling on tacks and getting beat with kendo sticks, and hit with trash can lids and all that shit, and getting thrown through tablesfuck that! I was thinking to myself, "Can I do this shit? Can I handle this shit?" This shit man, they go out there to put on a show and you sacrifice your body for everybody's pleasure.

PC: Yeah, when them tacks came out, I could see you were a little uneasy (laughing).

KM: I was like, what the fuck is this. I was like, tackswhen I saw them pouring them out, I was thinking they were gonna be fake. Then a few of them came towards my way and they were the long tooth tacks. They weren't the short ones; these motherfuckers were long and I was like hell nah.

PC: But on a brighter note, you said you feel like you are getting the hang of it now and its coming easier to you. Do you have to go back to Kentucky or are you done?

KM: Wrestling training is going good. I think I am getting better. I gotta go back to OVW. That's a great wrestling school. OVW is where all of the top wrestlers came from. Randy Orton, John Cena, Brock Lesnar, Kurt Angle, and so on came from there. CM Punk came from OVW, so OVW put out stars. So just to have the chance to go out there and work with some of the guys that's teaching me things, like my boy Frank Miller AKA "Trailer Park Trash." Man, that's my dog right there. We put in a lot of work on the mat. Nick Dinsmore AKA "Eugene", that's my dog too. We putting in a lot of work. He's showing me the ropes and the proper techniques. I enjoy that shit. I can't wait to go back. I have been watching a lot of pro wrestling matches. I'm the scrub out there, so I gotta put the ring together and shit, so I'm paying my dues out there.

PC: I know they send you to a lot of live events, but do they also have you breaking down tapes as well?

KM: Sometimes during training, we will pull out tapes or go to YouTube and watch some matches and they will show me good techniques and bad techniques and what's done wrong and properly. Then on Thursday nights, we will watch TNA and discuss it and stuff like that, you know what I'm saying? I'm just learning that shit.

PC: As excited as people were to see your TNA debut, a lot of people are ready to see you in the cage again. Now that you are about to go off to Holland, are you getting antsy or are you still just being patient and waiting for your time?

KM: I'm just being patient and taking my time because I've been in the cage before. I'm not in a rush to whoop somebody's ass because that always happens. It's bound to happen, so I ain't gotta rush nothing. I'm just being smart about my training, come back, look impressive, and come out with a victory. That's how I see it.

PC: Give us the lowdown on Holland. How long you going out there for and who will you be working with?

KM: I'm gonna be out there for about 6 weeks working at Mike's Gym with Mike Passenier. Mike's Gym has produced some great champions, like my boy Murthel Groenhart, Badr Hari, Melvin Manhoef, Sergei Lascenko, and Gokhan Saki is out there training right now.

PC: Is Mike Passenier gonna be cornering you as well or just training you in Holland and then you come back and finish up with the AKA bunch?

KM: I'm not sure yet. I gotta find out. I wouldn't mind him coming down and cornering me though. I will find out when the times comes.

PC: You have been very busy and I know it's been hard keeping up with all of the boxing going on. Have you been following?

KM: I missed the fights last week, but I got 'em recorded, so I'm gonna DVR them here soon. Brandon Rios and Alvarado put on a good ass fight, and other than that, I want to say rest in peace to Emanuel Steward. It's kind of crazy how everybody dying in boxing.