YAHYA MCCLAIN: "I WANTED TO ENSURE THAT THE ALI IMAGE WAS NOT TARNISHED" 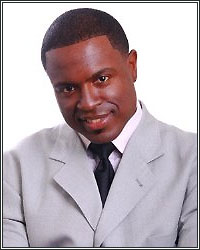 "I think the biggest accomplishment for myself and as a promoter was not just promoting the largest grossing female fight in the history of boxing, speaking of Laila Ali vs. Jackie Frazier or Laila Ali vs. Christy Martin, but the biggest accomplishment I think was building the brand Laila Ali; keeping her undefeated as a professional boxer, but making her a household name. Getting her endorsements, getting her into acting, and just building the brand. That brand, people know, and I managed her in and out of the ring...I found that my knowledge of boxing was better used in guiding the career of the daughter of The Greatest of All Time. I wanted to ensure that the Ali image was not tarnished in any way," stated Johnny "Yahya" McClain, the former boxer, promoter, and entrepreneur responsible for the successful career of female boxing icon Laila Ali. Check out what he had to say about his career, his new book, and much more!

YM: Thanks for having me.

JA: Before we get into the book that you've written, I wanted to talk to you about your boxing career. What were some of the memorable moments from your professional career?

YM: I've had a lot of memorable moments in my boxing career, but the first one that comes to mind was my third professional fight. I fought a guy that beat me in the amateurs and he shot my brother. Roger Mayweather was my trainer at the time and that whole situation was crazy. Police had to be brought in and that is something I've never forgotten. Another memorable moment I had was when I won the world title for the first time in South Africa. I went into the fight fighting against the local hero and knocked him out in the first round.  Prior to that fight, I won the WBC continental cruiserweight title against Sean McClain. Other memorable moments were when I knocked out Ole Klemetsen and Premyslaz Selta. I had a draw with Egerton Marcus, but kept my belt.

YM: I lost to him in the amateurs and he shot my brother a couple years later when we were street fighting, and then we fought again in the pros. That's one of the great stories you can read about in my book.

JA: What was the Roger Mayweather experience like for you?

YM: Roger Mayweather was, to me, a boxing guru. I met him at a very young age.  I was in the gym in the prime of his career, even before he won a World title. I would watch Roger beat guys up in the gym sparring. I would go to his fights and he would take me on trips with him when he fought. He was a real boxing mentor to me.

JA: Besides being a boxer, you're also an entrepreneur. You've written and starred in movies. When did that start to take form?

YM: I started to act when I was in LA dating an actress named AJ Johnson. That's when I got bit by the acting bug. After taking acting classes and actually working and getting paid to act, I really fell in love with it. Then one of my friends was making his own movie and asked me to play a role in it. He also needed some financial assistance with the project, so I put up some money to help him with his dream. I became fascinated with the whole process of making a movie, so I decided to make my own movies.

JA: What part of the process fascinated you the most to pursue a movie career?

YM: Being able to take on a whole different personality or to just create a whole different scene outside of yourself is just fascinating to me. For me, acting can be a stress reliever because you get to actually become somebody else, so for this minute, you're no longer yourself, and it's a great feeling to be able to go to that place and take yourself out of the equation.

JA: Did you feel conflicted with acting compared to fighting?

YM: No, I don't feel conflicted with acting compared to fighting because there are a lot of similarities.  The discipline that it takes to become a fighter is similar to acting.  Breathing techniques that it takes, the way you get prepared before fights; you have to get prepared before a scene, so they are very similar.  In fact, it's you that you have to really focus on in boxing, and in acting, you deal with other people, but you still have to get yourself to that point, to that emotion, so you have to rely greatly on your inner strength, just like boxing. When you're in a fight, I mean a tough fight, and you slugging it out and you get dropped, it's all about conditioning and inner strength that allows you to get back up on your feet.  So there are more similarities than conflicts.

JA: Was promoting the Laila Ali vs. Jackie Frazier fight the biggest accomplishment you've had in promoting fights?

YM: I think the biggest accomplishment for myself and as a promoter was not just promoting the largest grossing female fight in the history of boxing, speaking of Laila Ali vs. Jackie Frazier or Laila Ali vs. Christy Martin, but the biggest accomplishment I think was building the brand Laila Ali; keeping her undefeated as a professional boxer, but making her a household name. Getting her endorsements, getting her into acting, and just building the brand. That brand, people know, and I managed her in and out of the ring.

JA: At that time, female boxing was really starting to gain momentum with the regular boxing fan. Did you notice that as well?

YM: Well, I certainly did notice that women's boxing was on the rise and that's why I went so hard promoting Laila. I was able to talk ESPN into allowing her to headline one of their fight cards, and that had never been done before where a women's bout was the main event on ESPN. So yes, I definitely noticed.

JA: The Laila Ali brand is still going strong. Whenever you see her in a commercial or show, do you get bitter or jealous knowing that you were the mastermind in helping build her up.

YM: No, I don't get bitter or jealous knowing that I was the mastermind behind it because I'm a true believer in everyone gets their turn. Whatever's meant for you is not going to get past you, and whatever's not meant for you, you're not going to get. Yes, I may have been the mastermind behind her, but she did a lot of work, and her father's name played a role. I mean, of course I did my work, but it is what it is and I wish her continued success.

JA: At this point of your life and career, are you done fighting?

YM: When I first met Laila, I was still fighting, but I had already accomplished my goals in boxing and I found that my knowledge of boxing was better used in guiding the career of the daughter of The Greatest of All Time. I wanted to ensure that the Ali image was not tarnished in any way.

JA: You've recently written a book. What can readers find and come away from in your book.

YM: My book is a full story about my life. Having dealt with many people from an array of backgrounds, I give the reader a glimpse of the life that I have led, with friends, foes, huge celebrities, and even a couple of icons. It's a hard-hitting book dealing with many issues, from death, divorce and determination. "And Still..." will surely entertain and educate.  I felt my message could reach and relate to the people, so maybe they won't make the same mistakes that I did.

JA: What compelled you to write this book?

YM: I wrote my book because I have lived a very exciting and eventful life. I think that people will be entertained as well as educated or reminded of some very important life lessons. Also, I have a foundation, "The Absoloot Awareness Foundation", which is dedicated to educating the youth about obesity. My work entails promoting health and wellness along with teaching the sweet science of boxing to develop discipline and to promote respect. I mentor the kids to be strong, respectful, and confident individuals who positively contribute to society in order for them to be able to deal with today's challenges in the sometimes cruel world, especially with all the bullying that goes on in the schools these days. The suicide rate has increased incredibly or the kids turn to drugs and alcohol. My goal is to use my life experiences to help guide as many of the kids to the championship title or whatever they choose to do in life.

JA: What was the hardest section of the book that you wrote?

YM: There was no real hard section for me to write about emotionally, but the difficult part of the book was writing about my father because he was killed when I was 2 1/2. I have very limited knowledge of him other than the things that I've been told about and a few pictures.

JA: When will the book become available for purchase and where can the fans get a copy your book?

YM: The book is available now. You can go to yahyamcclain.com and watch the trailer and then press the "buy now" button to make your purchase. You can also find it on amazon.com or download it on Kindle.

JA: You said you grew up poor and came from the ghetto. Do you still pinch yourself and think, "Wow, look what I've done."

YM: Yes, I do. When I won the world title, it was my dream from a young child, and to win it in Africa was the icing on the cake.  Then when I promoted a fight on pay-per-view at the Turning Stone Casino and I was standing at the top of the arena just watching all the workers the morning of the fight; I'm watching like 100 people working and everyone's working because of the event that I put together. And all the other things in life that I've been able to overcome and have gone through, it really does astonish me at times. Then I stop and remember God, because I know that through God, anything is possible. All praise to God for my success.

JA: What advice do you have for young men and women who are trying to start there own business either in boxing or in movies?

YM: My advice is to gather information and seek knowledge about whatever it is that they are choosing to pursue. Get a good mentor that will coach you along the way, if possible.  Be patient, but start now. Have a plan, because if you fail to plan, you are actually planning to fail. Follow your dream and don't let anyone stop you because you only have one life to live, so do it like your doing it for TV.

JA: Thanks again for your time and we will chat soon.

YM: Thank you for your time, James, and tell the fans to follow me on twitter @yahballa and add these 2 dates for book signings: January 24 at the Corporate Fight Night at the Foundry at Puritan Mill in Atlanta, then at Sweat Shop Boxing Gym on January 31st also in Atlanta. They can go to corporatefightnight.com and yahyamcclain.com for more information.