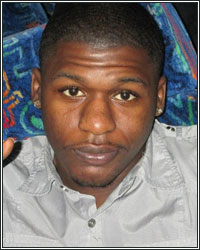 "Training is going well. I'm getting sharper and sharper. I got a whole 'nother week to get sharper and we doing well. This will probably be my only home fight, so I'm debuting here in Grand Rapids. I really don't like how the promoters run their stuff here, so that's probably why it will be my only fight here in Grand Rapids, but other than that, I still wanna do it for my hometown. I'm just happy, man. I'm happy that I'm getting my career started and I think it's going to be a long, long ride and it's just gonna be a part of the legacy," stated the other fighting son of Floyd Mayweather Sr., Justin Mayweather Jones, who is set to begin the journey of his professional career when he turn pro on July 6. Check out what he he had to say!

PC: How is training going for your pro debut my man?

PC: For the people that don't know who you are, give us your background.

JMJ: Legally, I am Justin Jones, but now I go by Justin Mayweather Jones. I didn't know who the other side of my family was until I was 19 years old. I didn't know who my father was until I was 19. It's a little backstory on that, as I'm sure you know, but when that came out, a lot of people just started calling me Justin Mayweather. And I'm nice with the hands too, so it was a natural thing and I put it all together now. It's an addition to the name.

PC: Were you boxing before you found out Sr. was your pops or did you pick it up after the fact?

JMJ: Yeah! I was in and out of the boxing gym before I found out. When I was younger, I actually wanted to be a fighter. I remember Mike Tyson blasting people, and he will always be my favorite fighter of all time. It was around that time when I was really into boxing as a kid coming up. Now I'm all about boxing. But Tyson was the most exciting fighter to ever do it, and plus I'm biased because I was a kid and he was popping, and when you're a kid, that sticks with you and it's always gonna kind of be your favorite. To this day, I still feel like he is the most exciting fighter since Ali.

PC: Your pro debut is July 6th. How do you feel? How is everything coming together?

JMJ: I've been doing fine. Training is going well. I'm getting sharper and sharper. I got a whole 'nother week to get sharper and we doing well. This will probably be my only home fight, so I'm debuting here in Grand Rapids. I really don't like how the promoters run their stuff here, so that's probably why it will be my only fight here in Grand Rapids, but other than that, I still wanna do it for my hometown. I'm just happy, man. I'm happy that I'm getting my career started and I think it's going to be a long, long ride and it's just gonna be a part of the legacy, you know what I mean?

PC: Definitely. Do you use the "Mayweather Style" or do you bring something different to the table, and who are you working with out there?

JMJ: I'm working with Larry Nicholson and my man Steve. They are fine trainers. And I also don't want to forget the people that helped me during my amateur career and that's Adam Mayweather and Johnny Battles; they helped me a lot. They were kind of taught under my father when he was back here, so I learned a lot of what my dad knew through them. I don't ever want to forget about Adam Mayweather and Johnny Battle, who helped me in the beginning.

PC: What weight class are you competing at for this fight and where do you feel you will make your mark?

JMJ: This fight, and probably my next 2 or 3, will be at 147 pounds. I eventually think I'm gonna make my mark at 140, but we will see how that turns out. But right now, I am a welterweight.

PC: What can the people in attendance expect from you?

JMJ: Boxing ability; just a natural born boxer with a punch, you know what I mean? I'm a boxer-puncher and I got the skills to pay the bills, so get them tickets and you gonna see what's happening, man. Not to say it like this, but honestly, it's definitely in the bloodline. Everybody that sees me knows it's just natural. I got a lot of natural ability and I gotta thank God for giving me a chance to be blessed with a certain type of genetics and instincts that I have along with my family. I understand that this is stuff that's passed down from generation to generation and each generation it gets stronger. The instincts become more and more stronger. I just gotta thank God and my family for blessing me with the genetics and opportunity to make this thing happen and better myself for the people that I care about.

PC: You say you only plan on fighting in Grand Rapids once, but will you also be looking to move to the west coast to resume training soon as well?

PC: Is the goal to eventually have your pops train you or you haven't given it much thought because he's hinted at retiring soon as well?

JMJ: We always think about that and talk about it. It's something that has been ongoing and talked about for a long time, but we will just see what the future holds. The Mayweather's are the best trainers in the world, so I don't have no problem working with them. But timing is everything and it will be a blessing to learn more things from them all of the time. I stay talking to my uncle Jeff a lot and it will be great. We will see how it works out. With or without, I feel like I'm gonna be a big name in entertainment period because I also have the music thing going on and different things. They are the best and I would love to have the opportunity to work with them, but if time don't permit it, then other people have become world champions without the Mayweathers in their corner. But I understand who the best is and I would love the opportunity to get down there and work with them. If I work hard, I can be the best and that's what I plan on doing.

PC: Jeff is my man and good people.

PC: I look forward to seeing a lot from you. I wish you the best on the 6th of July. Is there anything else you want to add?

JMJ: July 6th, man, is the start of something big and the legacy continues and it's going to keep going, man. Come out and support me and boxing in general and we just gonna keep going from there. The fight is in Grand Rapids, Michigan at 5/3 Ballpark; gates open at 6 and the fights start at 7 and I will be on the card and hopefully it will be quick work for me so I can go on about my business and party afterwards.