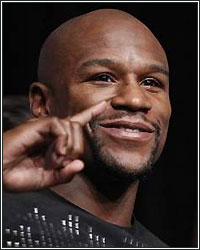 "I want to promote MMA fighters also. We lookin to promote MMA fighters, so it's the first time you're hearing it on FightHype," stated undefeated pound-for-pound king Floyd "Money" Mayweather, who recently revealed his desire to manage and promote mixed martial artists. According to Mayweather, his own influential advisor, Al Haymon, may soon be adding MMA fighters to his growing roster, and the multi-division world champion would love to do business with UFC President Dana White.

"You know, Al Haymon is looking to manage MMA fighters. Even though Al Haymon hasn't came on record and said it, but I want Al to manage MMA fighters. I think I can take it to the next level," Mayweather informed FightHype.com during a recent interview. "You know, I don't mind doing business with Dana White. Dana White's a cool guy. I've been knowing Dana before he got involved with the MMA."

It should be noted that Dana White, along with UFC heavyweight champion Cain Velasquez, were in attendance at Mayweather's weigh-in and fight with the previously undefeated Saul "Canelo" Alvarez.