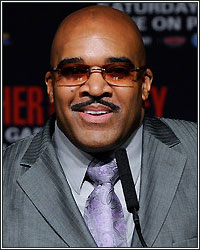 "When Floyd Mayweather makes up his mind on who he's fighting, which he hasn't yet, he will announce it to the world," stated Mayweather Promotions CEO Leonard Ellerbe, who refuted a recent claim by former jr. welterweight champion Amir Khan stating that he was no longer in the running to face undefeated pound-for-pound king Floyd "Money" Mayweather when he makes his highly-anticipated return to the ring on May 3. While it's unclear as to exactly what Khan has been told, according to Ellerbe, Mayweather is still mulling his choice of opponents, which was said to be between and WBA welterweight champion Marcos Maidana.

Golden Boy Promotions CEO Richard Schaefer was unavailable for comment at the time of this writing, so we're not sure if Khan was told that he would not get the fight, or if he's making an assumption based on his own frustrations. Either way, his comments on Twitter are probably not going to help his cause when it comes to Mayweather making his final decision.

STAY TUNED TO THIS STORY AS IT CONTINUES TO DEVELOP