TIMOTHY BRADLEY DISCUSSES THE BENEFITS OF HIS VEGAN DIET: "WHEN GUYS START FADING...I'M ABLE TO PICK IT UP" 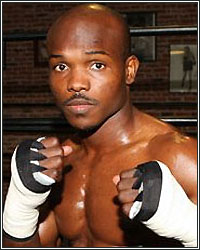 "I've been doing that since I was champion. Yeah, when I fought Junior Witter, I was vegan. I went vegan for that fight...Nutrients is what builds bigger muscles; not protein. It's the nutrients, man, so with that said, I was like, man. I consume more complex-carbohydrates than I do protein and I consume more good fat than I consume freakin' protein as well. You know, 65% of my intake is complex-carbohydrates. Another 20% of that is the official fat, and then the rest is just, you know, 10 or 15%, whatever is left, that's protein. I just eat a little bit of protein just to repair my muscles and stuff, but nurtients is what you need. That's why like when guys start fading in later rounds, I'm able to pick it up," stated undefeated WBO welterweight champion Timothy Bradley, who discussed the benefits that he believes his Vegan diet gives him over other fighters. Check out what else he had to say as he gives us an update from training camp.

TB: I'm feeling great. I'm ahead of schedule right now. I'm not killing my body. I did 12 weeks last training camp for the Pacquiao fight. I think I was ready around 8 weeks; it was hard, man, because I had to taper really early and then pick up again at the end. I didn't really have that peak performance like I wanted, so this time around, I'ma do 8 weeks. My weight's great; my weight's down. I'm in the low 60's. I got about 15 pounds to drop within the next two months and that's not normal for me (laughing). Normally I'm around 170, 175. I got up to 185 after the Pacquiao fight the first time.

BT: Damn! Do you put on weight like that pretty easily?

TB: Yeah. You know, it's just genetics, man. I eat everything and then from there, it don't matter; I just blow up. If you look at my dad, he's 230. He normally blow up around 250, but he's watching his weight and stuff now because he's getting older. But normally he's about 250 and he's 5'7". My uncles and everybody is big; everybody is just diesel, man.

BT: You sound like me. I blow up fast when I'm just chillin', like over the holidays, but when I get in the gym and start hittin' it hard, I get the weight off pretty quickly (laughing).

TB: Yeah, well the older you get, the harder it gets (laughing). I noticed that. I remember when I was 23, a week before the fight, I'll be 165 and I'll still make 140. I was 23 and I'd make weight easy and still feel strong. Now, it's a lot harder. To feel good in the ring, I gotta really take my time, so I take 3 months normally to lose weight.

BT: When you first moved up to 147, were you killing yourself to make 140 at the time or do you think you could've still fought at that weight?

TB: 140 was comfortable for me. I made the weight pretty easily. I mean, I would eat the week of the fight and everything and be hydrated and all that. After I had beat Devon and stuff, it was just like, alright, I'll move up to 47 since that's where the money's at. 147 is pretty much where I fought at when I was an amateur. I didn't fight at 140. I fought at 147. I went from 139 and then I fought at 147 and then 152 when I was amateur. It was natural. 147 was very natural and very easy because I was real comfortable. It was like that's where I belonged and I was real comfortable at 147 when I was an amateur, but then they changed the weight to 52 and then I started fighting like giants (laughing). Everybody was bigger than me. That's why I like  fighting guys that are taller than me because I'm used to fighting them.

BT: (Laughing) No doubt. I take it you're back on the vegan diet, right?

TB: Yeah, I'm on the vegan diet right now. No dairy, no nothing.

BT: Man, I don't think I could do that. I think the closest I ever came to a diet like that was when I juiced for a week. I definitely lost weight though. Can you feel any effects on your body while you're on the Vegan diet?

TB: Yeah. Well, what happens is after awhile, you basically hit the barrier where your metabolism is so damn fast, it don't matter what you eat, you burn it; you burn it up and you lose a massive amount of weight very quickly, but it's like, for instance, the week of the fight, I eat pasta. I eat a lot of pasta the week of the fight; every night I have a bowl of pasta and that's like to keep my muscles full of freakin' glucose, man, and just keep complex carbohydrates in my system. It's almost like carbohydrate-loading, you know what I mean; loading before a big day. Most guys, they sometimes don't even eat. I've seen guys like at the weigh-ins laying on the floor, dehydrated; they don't drink water for like a day or two. Me, man, I'm eating pasta, drinking water, you know, eating fruits; because like I said, it becomes to where after 3 months, my body just burns anything. It just burns it up, dude; eats up and carries it off. Yeah, it's real efficient for me. There's a science to it, man. You gotta know what you're doing. You gotta research and consult with a doctor or a dietitian to really see what you're lacking.

BT: How long have you been doing that?

TB: I've been doing that since I was champion. Yeah, when I fought Junior Witter, I was vegan. I went vegan for that fight. What I did was, I tried...see, I met these doctors, man, naturopathic doctors, and I met 'em and they basically connected me with a vitamin company called USANA. A lot of top athletes around the world, basketball players, Olympians, take USANA products because they're products that you can trust because of the drug testing. So they were naturopathic doctors and they told me a story. Basically, they were vegans/vegetarians, whatever you want to call it, and they were just like, "Well, what's the myth of us as humans?" I was like, "Well, there's a couple myths out there, but the way I was raised was that God created us." He was like, "Yeah, yeah, I agree with that, but which animal is similar to the human species?" I said, "Well, you got those chimps and gorillas and stuff. They act like humans." And they said, "Alright, well, you see how big they are?" I said, "Yeah!" They said, "You see how strong they are?" I said, "Yeah!" They said, "Well, what do they eat?" I said, "Um, I think they eat natural vegetation. Every time I see a picture, they eating greens and fruits and stuff." They was like, "Well?" And I was like, "Man, say no more! Say no more, you sold me." (Laughing) He was like, "You see how fast they are, strong they are?" I was like, "Man, hey, I'ma try this." After like a whole week, I was good; I felt completely different. I was able to step my training up and train harder and faster and longer than ever before, and I didn't feel bloated. I had like instant energy, so I was like, man, this is crazy. I was just throwing stuff around and just training, man, and just burning, and after I refueled, I felt good and I healed up quicker. You know, a lot of people have that perception, "Oh, you need a whole lot of protein." That's not true, man. You need protein to help repair your muscles and stuff, but you don't need to overindulge in protein thinking that you're going to build bigger muscles. Nutrients is what builds bigger muscles; not protein. It's the nutrients, man, so with that said, I was like, man. I consume more complex-carbohydrates than I do protein and I consume more good fat than I consume freakin' protein as well. You know, 65% of my intake is complex-carbohydrates. Another 20% of that is the official fat, and then the rest is just, you know, 10 or 15%, whatever is left, that's protein. I just eat a little bit of protein just to repair my muscles and stuff, but nurtients is what you need. That's why like when guys start fading in later rounds, I'm able to pick it up.

BT: Did you have to teach yourself all of that knowledge?

TB: Pretty much; just reading books, you know. Just reading books, man, and you can find anything on the internet, man; anything you don't know or think about. That's what I do, man. I'm a student of this. I don't have a degree in nutrition and all that stuff, but I can damn sure make people lose weight and be a nutritionist, you know, as far as calories and what they should eat; I definitely can do that without having a degree because I just basically taught myself just reading books. Before I called you, I was researching (laughing).

BT: That's wassup. You only do the vegan thing for fights though, right?

TB: Yeah, only for fights. Man, my dad's from the South, man. My parents grew up in the South. I like my meat and potatoes, man. I like my steak, you know what I mean. I like all that stuff. I just try to live a simple life, man. My job is my job and I get down, I get busy when I'm getting ready to train; I get serious and focused and stuff, but, you know, I got kids, man, and they like McDonald's and stuff. I'm sorry, man, I like to live too and that's just my thing. It may kill me sooner and it may not, but at least my kids are having fun and they're all happy and stuff, and we're having a good time and I'm enjoying myself. I really don't care what people think or say. I'm ready to be professional at all times and look good, but man, like I said, hey, I got a family; this is my job and when I get ready for my job, I get ready like no other. I work my butt off, man, and I get the job done most of the time.

BT: Hey, everybody has an off-season and you gotta treat yourself from time to time, right?

TB: Hey man, I'm a firm believer in that. You know, you got these people that are fitness buffs and they in the gym every single day, dude. Every day, working out. That's boring to me, man. (Laughing) That's so boring. You know, I've been training for 20 years of my life doing this boxing stuff, man. You know, running every day, biking every day, that's just boring, man. I do this hardcore. I've been doing this since I was 10 years old, you know.