MAYWEATHER VS. MAIDANA UNDERCARD SHAPING UP: AMIR KHAN VS. LUIS COLLAZO ON TAP 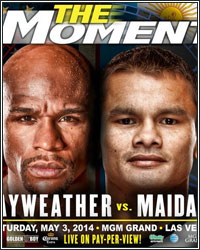 With less than 7 weeks to go before undefeated pound-for-pound king Floyd "Money" Mayweather makes his return to the ring to face WBA welterweight champion Marcos Maidana on May 3 at the MGM Grand Garden Arena in Las Vegas, Nevada, the undercard is still being finalized for what is considered to be one of the biggest boxing events of the year. Though no official announcements have been made, FightHype.com can address some of the rumors regarding the supporting bouts.

First and foremost, sources have already confirmed to us that former jr. welterweight champion Amir Khan will indeed be facing former welterweight champion Luis Collazo in a bout that will likely be featured as the co-main event. We're told that the official announcement of the fight, which will likely be made by Amir Khan himself during a press conference in the UK, is on hold simply to allow Team Khan time to finalize an agreement to sign with influential adviser Al Haymon.

Furthermore, fans can also expect former welterweight champion Adrien Broner to make his debut in the 140-pound division on the card. Though his opponent is unclear at this time, FightHype.com originally received word that top lightweight contender John Molina Jr. was first being considered, but now we're told that it's looking more and more like it will be jr. welterweight Carlos Molina instead. While they share the same last name, the difference between the two Molinas is significant. Though John Molina is 3-2 in his last 5 fights, the hard-hitting California native is on 2-fight knockout streak, one of which being a come-from-behind stoppage of highly-touted Mayweather Promotions fighter Mickey Bey. Carlos Molina, on the other hand, is not known for being a big puncher and hasn't fought since being stopped in the 10th round by Amir Khan back in December of 2012.

Rounding out the televised portion of the pay-per-view card will likely be the super middleweight showdown between J'Leon Love and Marco Antonio Periban, who is ranked #3 by the WBC. Though Love himself is not currently ranked by the WBC, a victory over Periban would no doubt catapult him into a position justifying a future fight with WBC champion and fellow Haymon stablemate Sakio Bika.

Fans can expect the non-televised portion of the undercard to feature several rising Mayweather Promotions fighters in showcasing bouts. Based on previous Mayweather events, I wouldn't be surprised to see any one of the remaining openings filled by jr. middleweight Chris Pearson (11-0, 9 KOs), super middleweight Luis Arias (9-0, 4 KOs), super middleweight Ronald Gavril (8-0, 6 KOs), cruiserweight Andrew Tabiti (5-0, 5 KOs) or possibly super middleweight Lanell Bellows (6-1-1, 5 KOs). Keep in mind that Mayweather Promotions will also be putting on a card the night before, on May 2, headlined by a jr. middleweight title clash between WBA champion Erislandy Lara and former champion Ishe Smith. Sources tell us that the co-main event of that card will feature lightweight contender Mickey Bey challenging for his first world title. That being said, whichever Mayweather Promotions fighters don't make it onto the May 3 card, chances are, you'll find some of them fighting on this card.

Though nothing is official and all fights are subject to change, if I had to guess, I'd say Mayweather vs. Maidana is shaping up to look something like the following: