MAYWEATHER VS. MAIDANA IN JEOPARDY OVER GLOVE CONTROVERSY 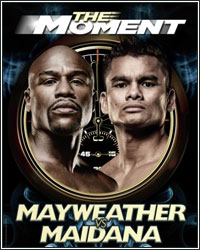 "No fight," stated Mayweather Promotions CEO Leonard Ellerbe, who moments ago just left a meeting with  members of Team Maidana and representatives from the Nevada State Athletic Commission. Evidently, a controversy over the gloves that WBA welterweight champion Marcos Maidana is wanting to use has placed Saturday's fight in jeopardy.

When both teams arrived to select their gloves, Team Mayweather was not pleased with the lack of padding in the Everlast gloves that Team Maidana wanted to use. After hours of back-and-forth conversations between Ellerbe, Robert Garcia, and Golden Boy Promotions CEO Richard Schaefer, the Commission ruled that the specific gloves that Maidana wanted to use were not acceptable, however, the actual brand and style would be allowed provided Maidana use a different pair.

That decision did not seem to sit too well with Ellerbe, who had no problem declaring that the fight would be off, at which point, Team Maidana abruptly packed their bags and left the room. It's unclear at this point what the status of the fight is.

BE SURE TO CHECK BACK SOON FORE MORE DETAILS