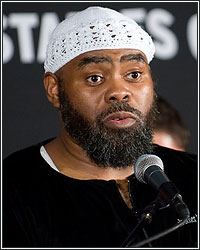 "Floyd has fought at such a high level that we scrutinize him on a different platform. Him and Maidana put on a real good fight, but I don't think Maidana won the fight," stated world-class trainer Naazim Richardson, who shared his thoughts Floyd Mayweather's performance in his unification bout with former champion Marcos Maidana this past Saturday. As far as Richarson is concerned, although Maidana had some success in roughing up Mayweather, he was never able to really faze the undefeated champion.