OBSERVE AND FIGHT: MIGUEL COTTO VS. SERGIO MARTINEZ IS A VERY INTRIGUING FIGHT 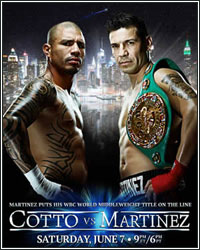 It's Monday. Welcome back for another edition of Observe and Fight, The Boxing Observer's compilation of observations and random thoughts from the week that was in boxing. Get caught up on some of the most recent events you may have missed out on, including a preview of Cotto vs. Martinez, Carl Froch's redemption win over George Groves, a possible unification fight for Gennady Golovkin, and much more. Without further ado, check out the latest observations from the Boxing Observer, David Kassel.

Miguel Cotto vs. Sergio Martinez is a very intriguing fight! On paper, Martinez holds every possible advantage, with the exceptions of crowd support and experience. Cotto has been in many big fights while Martinez has been in one (Julio Cesar Chavez Jr.) on American soil. Martinez has only fought once in Madison Square Garden, and that was in the theater. He'll be fighting in front of 20,000 screaming Puerto Ricans. However, none of that matters once the two men step in the ring. Martinez will have the edge in power, size, stamina, and speed. I also have to give the chin advantage to Martinez since Cotto is the smaller man. If Martinez is fully healthy, as he indicated he was on 24/7, I believe he knocks Cotto out late. However, if Martinez proves to be anything like a 39-year-old fighter who has been out of the ring for over a year, we could see Cotto make history by becoming the first Puerto Rican fighter to win world titles in 4 weight divisions. I don't believe Cotto has what it takes to KO Martinez. Cotto must box smart and cut the ring off. If he can wear Martinez out by going to the body, he could pull off the upset. Either way, I'm very interested in watching these two future hall-of-famers meet in the Mecca!

The undercard, though, leaves me wanting much more. Marvin Sonsona vs. Wilfredo Vazquez Jr., Jorge Melendez vs. Javier Maciel, and Andy Lee vs. John Jackson. Where is the need for me to want to watch any of these fights, notwithstanding paying $70 to order this card on pay-per-view? I will watch, but I feel cheated by this extremely weak undercard.

Carl Froch proved me, and many others, wrong with his Knockout of the Year candidate Saturday against George Groves. I thought Groves would box circles around Froch in the rematch because Groves had such a speed advantage. Groves decided to go toe-to-toe instead, seemingly against the wishes of his corner, and it cost him dearly. The right hand landed by Froch on Groves' chin in Round 8 was one of the most devastating punches in recent memory on such a grand stage. Froch has many options at this point, and Julio Cesar Chavez Jr. seems to be at the top of the list. Las Vegas would be a great place for that fight, but you'd be foolish to think a Froch vs. Chavez Jr. match-up couldn't fill 80,000 fans inside Wembley Stadium again.

Froch vs. Groves II is already my choice for "Event of the Year." There is nothing going to top that event in 2014.

Congratulations goes out to Sam Soliman for winning the IBF middleweight title at the age of 40! Soliman outpointed Felix Sturm and made it look easy in the process. Soliman immediately called for a unification fight with Gennady Golovkin. Soliman is clearly no dummy as he is fully aware, at the age of 40, he needs big fights to cash out because time is running out. Golovkin's opponent is not set for July 26th (although all indications are it will be Daniel Geale getting the nod), and that may be too soon for Soliman to get back in the ring, but if Golovkin is not going to take the fight, I'm sure Al Haymon and Golden Boy Promotions would have no problems paying Soliman what he is worth for a fight with WBO middleweight champion Peter Quillin. Hey, for the right price, Soliman could even get Quillin to come to Australia for the bout.

More congratulations goes out to Nonito Donaire for winning a featherweight title, but I wonder if he has the "Flash" anymore. Two years ago, this guy was a top-5 pound-for-pound fighter. Now, after an embarrassing loss to Guillermo Rigondeaux, Donaire is trying to put it back together at featherweight. Very few fighters have had success jumping up numerous weight classes, and even fewer have done it as quickly as Donaire has. He still has the power, but I question if he has the ability to intimidate or bully other fighters at a higher weight. The speed seems to have been neutralized as he has jumped up also. I'm a huge fan of Donaire's, but maybe featherweight is just too much. Don't get me wrong, Simpiwe Vetyeka is a very good fighter, but he is not a P4P. Donaire may run into some problems in future fights.

I do want to see a title unification between Donaire and Evgeny Gradovich! I know Donaire said he was going to give Vetyeka a rematch, but Gradovich has quickly ascended into one of the most exciting fighters in boxing today. His win Saturday, against Alexander Miskirtchian, showed a vulnerable side to Gradovich, which makes him even more of an attraction. If we can't get Gradovich vs. Donaire, I at least want to see them on the same card in the hopes of building a big event. How about the Donaire vs. Vetyeka rematch with Gradovich vs. Nicholas Walters as the co-feature?

In case you missed the other Knockout of the Year candidate, be sure to check Nicholas Walters' 5th-round knockout of Vic Darchinyan. I think it's time Darchinyan hung up the leather. He has given a ton to the sport, but he doesn't have it anymore, and it's beginning to get scary when he steps in the ring.

Another world title changed hands in Mexico City on Saturday night. Carlos Cuadras dethroned WBC super flyweight champion Srisaket Sor Rungvisai via technical decision. The bout was stopped because of a deep cut over the Cuadras' left eye, causing the judges scorecards to come into play since the fight was in the 8th round. However, Cuadras has quietly amassed a 30-0 record, with 24 KO's, and could be the man to finally dethrone long-reigning champion Omar Narvaez.

Javier Fortuna and Luis Rosa both passed very stiff tests on Saturday night in Las Vegas. I know some people were not impressed with Fortuna, who had a nasty cut which shut his right eye for most of the fight, but this is the kind of test young fighters need to go through to help them understand they cannot knock everyone out in their way. The same goes for Rosa, who was in tough against Del Valle. Both fighters struggled through adversity, but made it out with wins, and at the end of the day, that's all that matters.

I thought Jim Ross did an outstanding job on Golden Boy Live, Monday night. The main event was extremely exciting as Rocky Juarez proved he still has a little left in the tank, but I thought Good Ole J.R. stole the show! It was very refreshing to hear his voice again, and I believe he has a career, at least part-time if he wants it, calling future boxing matches. Also, kudos to Golden Boy Promotions for putting together a show for the troops.

Prayers go out to Nacho Beristain, who was hospitalized Wednesday night. Reports indicate Beristain is in stable condition, but indications are the issue stemmed from heart problems. Beristain is as established a trainer as Freddie Roach, and we all hope he gets well soon.

Also, Rest in Peace to former WBC light heavyweight champion Matthew Saad Muhammad. The Philadelphia based fighter had a 2 1/2 year run as the light heavyweight king, including his 1980 Ring Magazine Fight of the Year with Yagui Lopez. Muhammad always put his heart on the line in the ring and will be forever missed. Our thoughts go out to his family.

Each week, I feature an email from a fan on Observe and Fight. This week's email comes to us from Michael Baldwin regarding the status of James Kirkland...

"Can you please tell me the status of James Kirkland (baby Tyson). It seems like he has been the forgotten man again in the jr. middleweight division. Is he in prison again? Is he having promotional issues? Health? What gives. I'd love to see him bang it out w/Keith Thurman, GGG, Cotto, or anyone at 154. With big Ann in his corner, he'll be competitive in any fight! What gives!!! Thanks Man."

No problem. Kirkland is currently signed with 50 Cent's SMS Promotions, and considering SMS has no big dates scheduled to promote any fights (SMS announced this week it will be promoting a Friday Night Fights card on ESPN, but Kirkland is too big a name to be fighting on that card), there is no status on Kirkland. Gamboa is fighting Terence Crawford at the end of June, but that's really all anyone knows about SMS fighters. Kirkland is just waiting for his name to be called, but his promoter isn't doing a great job of getting things done for his career.

That's all I've got for this week. There will be no Observe and Fight next week as I have an engagement which will keep me from my column. Email any questions or comments to dkassel@fighthype.com and I will answer them throughout the week. Your email may be featured in the next "Observe and Fight." Follow me on Twitter @BoxingObserver, and be sure to "Like" The Boxing Observer on Facebook.