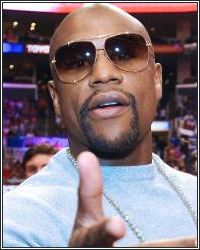 "You know, everybody is giving [Danny] Garcia a tough time. I mean, it's okay to get a tune-up bout just to stay sharp. It's a tune-up bout to stay sharp and keep the tools tight. You need fights like that. He's still young and he needs fights like that," stated undefeated pound-for-pound king Floyd Mayweather, who came to the defense of WBC & WBA welterweight champion Danny Garcia during a recent conversation with FightHype.com. Garcia received a lot of criticism leading up to and after his 2nd round knockout of Rod Salka, an unranked lightweight who many felt never deserved a shot to face the unified jr. welterweight champion. The fight was considered to be a mismatch the moment it was announced, prompting the sanctioning bodies to refuse to approve Salka as a legitimate title challenger. Although fans and media alike were extremely critical of the matchup, Mayweather explains that bouts like that are a necessity for young fighters who have participated in consecutive difficult fights.