WILLIE MONROE JR. EAGER TO FACE ALL THE BIG NAMES AT MIDDLEWEIGHT: "PUT SOMEBODY LIKE ME IN THE MIX" 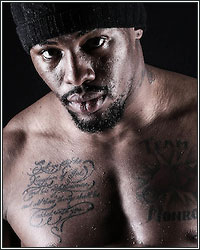 "There is going to be a lot of middleweights that's scared to fight, but we gonna start getting to them one by one. I'm not really this boisterous, loud, arrogant type of fighter with a loud mouth, but we gonna let people know. We need to be fighting Matt Korobov and Triple G and all these other top middleweights. We need to be fighting these guys; Peter Quillin as well. I'm not calling any of these guys out, but we are all middleweights, we in the same division, and we need to make some big fights happen, man, so why not put somebody like me in the mix," stated middleweight contender Willie Monroe Jr., who made it clear that he's more than willing to test his skills against all the top names in the middleweight division. Check it out!

PC: We haven't seen you since May when you won the Boxcino Middleweight Tournament. What's the word on you?

WMJ: Man, you know how this boxing world is, man. It's one thing today and another thing tomorrow. I don't know, they got me slated for January 16th on ESPN. It is what it is. All I can do is stay prepared. When Peter Quillin relinquished his WBO title, I own the NABO and I'm rated #7 by the WBO, so when he relinquished his WBO belt and Matt Korobov needed an opponent, I thought my name would be thrown in the mix, but I guess not, so it is what it is.

PC: Do you feel winning the tournament was a gift and a curse because now people know what you bring to the table?

WMJ: I can't say that. I can't say whether it was a gift and a curse or not because I always say God don't make any mistakes. My job as a fighter is to stay ready, regardless. Whether I fight tomorrow, 3 weeks from now, 3 months from now, or 3 years from now, I will be prepared. You know what they say; success happens when preparation meets opportunity, so I need to be prepared at all times. That's something my grandfather told me. If I stay ready, I don't have to worry about getting ready.

PC: You got a lot of press after the win over Brandon Adams. What was that like for you?

WMJ: It was a blessing. I was glad to be able to get some fans on my side. I got a lot of Cuban fans on my side. Everybody knows my grandfather was Afro Cuban and I wear the flag on my trunks when I fight and I picked up a lot of Cuban fans, so shout out to my Cuban fans because they know I got that old school Cuban style of fighting and they really appreciate it. The interviews, the fans, it's all a blessing.

PC: With your style, do you feel like you present a problem for anyone at middleweight?

WMJ: Yeah, yeah because think about it, my style is very similar to an Erislandy Lara, and they just robbed him when he fought Canelo. They robbed him blind. He won at least 8 of the 12 rounds. The sport of boxing has almost been derailed a little bit. A lot of guys are looking towards MMA and the UFC for the "fan-friendly" fights and everybody wanna see knockouts and bang out type of fighters and that sells tickets, and I understand that, but a lot of these guys aren't taught the art of boxing, which is to hit and not get hit. When you got 99% of the world trying to bang out and you got that 1% hitting and not getting hit, it's hard to adjust to because they are not used to seeing guys like myself, like a Erislandy Lara and a Guillermo Rigondeaux. We are technicians in the ring and we know how to hit and not be hit, and who wants to learn how to do that? It's easy to go toe to toe, but it's not about that. It's not about who hits harder; it's about who is smarter.

PC: The game is boxing, not fighting.

WMJ: Exactly! You gotta think about it, you have guys saying, "Boxing ain't like it used to be. We don't have the Sugar Ray Leonard's, the Tommy Hearns and the Alexis Arguello's." They call that the Golden Age and I tell them, "Those guys were boxers." They were pure boxers and now if you see a guy that fights like they fought, you scrutinize them on TV. You have the casual fans who don't understand boxing; they just wanna see good fights, so when you watching the fight and you got the commentators scrutinizing the guy, the casual fan thinks it is boring. If you make someone believe something is a certain way or supposed to be a certain way, if they are a casual fan, they gonna believe that. I think a lot of these commentators and promoters are tearing the sport down that they plan to survive in. Jon Jones is a really good friend of mine and I was sitting down with him watching a UFC fight and you hear the commentators scream, "He just hit him with a spinning back kick," and blah, blah, blah, and they are going crazy. You never really hear them say anything negative. I'm sitting there with Jon Jones and Jon is telling me, "That kick was horrible, his form was bad, and he didn't do this well." But the whole time, the commentators are talking it up. So the casual fan at home is like, "Oh snap, that's good. That's where it's at." You watch a boxing fight and you will see a guy who is super skilled and the commentators are saying, "He's safety first. He doesn't want to mix it up. He doesn't want to fight." And the casual fan is sitting at home saying, "This dude can't fight."

PC: I had a similar conversation with Andre Ward, who told me a lot of people don't understand how the negative epitome during commentary of these fights will run fans off.

WMJ: Exactly, and that's why I like Andre Ward. I like Paulie Malignaggi, Roy Jones, and George Foreman when he was commentating, because these guys have been on both sides of the fence. They have been in the ring. Anybody can sit there with a microphone and talk, but you know what it's like to be there and actually fight and then to get on the other side of the fence and talk about it, that's where it's at. I tell people all the time you can watch NASCAR all you want, but until you get in a car and drive, you not getting no license.

PC: I appreciate your time. Best of luck when you get back in there and I look forward to it. Is there anything else you want to add?

WMJ: Keep following me. Follow me on Twitter @WILLIEMONROEJR and Instagram at WILLIEMONROEJR and look for big things to come in 2015. There is going to be a lot of middleweights that's scared to fight, but we gonna start getting to them one by one. I'm not really this boisterous, loud, arrogant type of fighter with a loud mouth, but we gonna let people know. We need to be fighting Matt Korobov and Triple G and all these other top middleweights. We need to be fighting these guys; Peter Quillin as well. I'm not calling any of these guys out, but we are all middleweights, we in the same division, and we need to make some big fights happen, man, so why not put somebody like me in the mix.