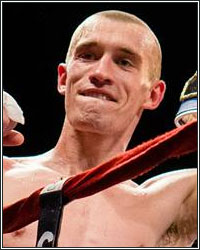 "Other than the day I got married, it's the best feeling I ever had in my entire life. I couldn't even sleep that night when I went home...Andre Ward hasn't fought in like 2 years; maybe he's looking for a step up to light heavyweight and maybe he wants to test the waters. Then you got Adonis Stevenson and Jean Pascal, maybe they won't come to terms. I want these guys who they are calling the best...I'm deserving of a top 10 ranking," stated light heavyweight contender Tommy Karpency, who talked about his recent victory over Chad Dawson, his future plans, and much more. Check it out!

PC: Congratulations on the big upset win over Chad Dawson. How does it feel to hear your name called as the winner?

TK: Other than the day I got married, it's the best feeling I ever had in my entire life. I couldn't even sleep that night when I went home (laughing) because I knew what I had just accomplished. It was a great fight all together.

PC: You took that fight on very short notice and anytime you do that, you have to be concerned about preparation time. How was your short preparation for this fight?

TK: Here is the thing, we took the fight, we sparred hard for 2 weeks. That's how much time we had to get ready; 2 weeks. We worked hard, but what helped me was, I don't know if you know Dhafir Smith, but in July, we fought him 10 tough rounds in July. He is a tough journeyman, so by me fighting him in July, I was in pretty good shape even though I hadn't been in the gym and sparring a lot like I usually do. So that helped me out. So we went out there to Connecticut with nothing to lose. I fought Cleverly in Wales, I fought Murat in Germany, and Fonfara in his backyard, so it was just another day at the office for me, no matter where the fight occurred.

PC: Chad is a tricky southpaw that uses range well. Did you take a few rounds to figure him out and get his rhythm down?

TK: Yeah, when you watch the fight, I felt I had his timing down early; like the first twenty or thirty seconds of the first round. I was throwing a counter left over his jab and from that point on, I was like, "I got this guy's timing down." A lot of people don't realize I got good hand speed and foot speed too and I think that surprised a lot of people. I mean, my speed and coordination and reflexes was just as good as Dawson's. I think that's what gave him trouble.

PC: You caught him with some nice shots and even buzzed him a few times. Were you surprised at how cleanly you were catching him?

TK: You know what? I saw Ward drop him a couple of times and I saw Adonis drop him, so I knew his chin was suspect. The problem I had was I had to pace myself when I was throwing my shots, so I couldn't throw a lot of power in my shots. I could punch a lot harder than I was hitting him and it was still buzzing him. I had to reserve myself a little bit because we had the short camp going into the fight. So I had to make everything count. You don't want to unload the tank and he doesn't go and I just gas and I can't do anything.

PC: Did you ever get a little tired during the fight?

TK: In the second half of the fight, I slow the pace down even more. Chad said he was hurt early, but I think he got hurt in like the second round. The thing was, they were talking about my pace being slow, but his pace was slow. His pace was slow because I was counter-punching him so nice. So he was kind of scared to really engage with me because I was catching him with counter shots off of his combinations and it was making him weary. So my counter-punching allowed me to slow the pace down.

PC: You got the win, so I'm sure it didn't bother you too much, but did you feel disrespected that Chad never gave you any credit and just kind of blamed it on the injury and the sport wanting him out of the game?

TK: Yeah, you know what? After the fight, he was upset talking about he was hurt and he hurt his shoulder in the 3rd round. First off, I know he didn't hurt his shoulder in the 3rd round. If you watch the fight, he didn't stop throwing his left hand until about the 7th round. Also, I could sit here and cry and say I only trained for 2 weeks and my thing is, I didn't tell anybody, but I hurt my hand in the first round of the fight. I hurt my left hand in the first round of the fight and it's still swollen right now, but I just kept fighting. I was like, "I'm here fighting Chad Dawson, I will worry about my hand being hurt afterward." A lot of fighters will tell you, "I was hurt, but I fought through it." And that's what you gotta do. You gotta take your lumps and be respectful, that's all.

PC: I thought no way can Tommy Karpency win in Connecticut by decision with no knockdowns or point deductions and you did it.

TK: It was a great feeling. It was like 96-94 Dawson, 96-94 me and I was like, come on please, and Julie Lederman, she was the last card read and she is a good judge and she got it right. The judges got the score right. Dawson, he never landed any effective power on me. You see throughout the fight that I was the one landing the eye-catching shots. He really never landed any eye-catching shots. He would throw like a triple jab sometimes and he would catch me with the last jab and that would be about it. He never really landed no noticeable shots and buzzed me. I buzzed him a few times throughout the fight.

PC: Big win for you, but I'm sure you're not trying to enjoy it too long before you get back in there. Anyone in particular you would like to fight next?

TK: I don't have a certain opponent picked out. I think this win should rank me among the top light heavyweights in the world and I would fight any of them as far as that's concerned. Andre Ward hasn't fought in like 2 years; maybe he's looking for a step up to light heavyweight and maybe he wants to test the waters. Then you got Adonis Stevenson and Jean Pascal, maybe they won't come to terms. I want these guys who they are calling the best. I fought for a world title against Cleverly and lost. It was a bad fight for me. I fought some top 10 guys. I mean, my losses to Cleverly and Fonfara, they were in the top 10. And now I got a win against a top 10 guy. He was ranked #6 by ESPN and I think #5 in Ring Magazine, and I beat him, so I think I'm deserving of a top 10 ranking.

PC: I hope you land something big soon. I definitely would like to see you with a full training camp. Is there anything else you want to add before I let you go?

TK: I just want to thank all of the people out there for supporting me and a special thanks to my wife and my family for all of the support they give me. And thanks to you for calling.