RANDY CABALLERO SAYS STUART HALL IS "NOT HUNGRIER THAN ME"; EAGER TO TAKE VACANT IBF BANTAMWEIGHT TITLE ON OCT. 25 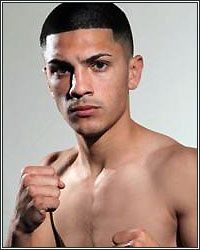 Since turning pro in 2010, Randy Caballero (21-0, 13 KOs) has become a staple of the Southern California fight scene, packing venues around the area as he made his way up the bantamweight ladder. But "El Matador" was not afraid to leave his comfort zone in April 2014, as he traveled to Kobe, Japan to defeat Kohei Oba via eighth-round technical knockout in an IBF Bantamweight Title elimination bout. The victory earned the 24-year-old Caballero a shot at a world championship on October 25 when he faces England's Stuart Hall (18-3-2, 7 KOs) for the vacant IBF World Bantamweight Championship at Salle des'Etoiles in Monte Carlo.

"This is the moment every fighter dreams of, and I would have gone anywhere to fight for that title," said Caballero. "Stuart Hall is a former world champion, he's hungry to get that title back, but he's not hungrier than me. I've worked harder than anyone for years, and this is my time."

"Every boxer dreams of becoming a world champion, but only those who work hard and are willing to go the extra mile - like traveling half way around the world to fight for a title - will persevere," said Oscar De La Hoya, President and Founder of Golden Boy Promotions. "Golden Boy Promotions is committed to putting on the best fights possible for fans all over the world, and I fully expect 'El Matador' and Stuart Hall to deliver on that promise on October 25."

A native of Coachella Valley, Calif. who is proud of his Nicaraguan heritage, Randy "El Matador" Caballero has gone from local hero to international standout as his meteoric rise has seen him defeat the likes of Alexis Santiago, Jose Luis Araiza, Manuel Roman and Luis Maldonado.

Caballero vs. Hall is part of the highly-anticipated "Title Tornado" card that also includes WBA/IBO strawweight champion Hekkie Budler's title defense against Xiong Zhao Zhong of China, the WBC Silver middleweight title fight between Martin Murray and Domenico Spada and the WBC Silver light heavyweight title bout between unbeaten prospects Ryno Liebenberg of South Africa and Eleider Alvarez of Colombia. The fight will be broadcast live on Channel Five in Britain as well as SuperSport in Sub-Saharan Africa.

Ticket pricing and purchase information can be found by calling (377) 98 06 36 36 or emailing ticketoffice@sbm.mc.