AMIR KHAN: "ALEXANDER IS TRYING TO GIVE HIMSELF CONFIDENCE" 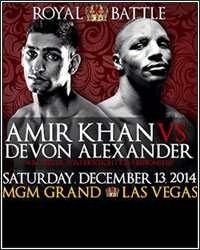 The Media Center at MGM Grand in Las Vegas was buzzing today as some of boxing's brightest stars took to the stage and addressed the media ahead of their respective bouts on the "Royal Battle: Amir Khan vs. Devon Alexander" fight card taking place this Saturday, Dec. 13 live on SHOWTIME from the MGM Grand Garden Arena.

Here is what former jr. welterweight champion Amir Khan had to say at today's press conference.

"This is a great fight and a great fight card overall from top to bottom. It's almost like pay-per-view. But it's a great opportunity for my fans to see me fight.

"From me, you can expect to see a lot of explosiveness and movement. I don't understand why Devon is saying he's fought better than me when we've fought most of the same guys.

"I've fought a lot of top guys, too. It sounds to me like Alexander is trying to give himself confidence; saying things to pick himself up.

"I feel like a different fighter at 147 pounds. I feel stronger. I'm happier making weight.

"I am not taking this fight lightly. I am not looking past it one bit. Devon Alexander is tough and I am going to stay focused."

"Royal Battle: Khan vs. Alexander," a 12-round welterweight bout for the WBC Silver Welterweight Title, is promoted by Golden Boy Promotions in association with Khan Promotions and The Great Promotions and is sponsored by Corona Extra, AT&T and Mexico - Live It To Believe It! The event will take place at the MGM Grand Garden Arena in Las Vegas, Nev. and will air on SHOWTIME (9 p.m. ET/6 p.m. PT). In the co-main event, Keith Thurman defends his interim WBA Welterweight World Title against Leonard Bundu. Additionally, Abner Mares will face Jose Ramirez in a 10-round featherweight bout and opening the telecast, Jermall Charlo will meet Lenny Bottai in a 12-round IBF Junior Middleweight Title eliminator. The SHOWTIME CHAMPIONSHIP BOXING telecast will also be available in Spanish via secondary audio programming (SAP). Preliminary bouts will be televised on SHOWTIME EXTREME (7 p.m. ET/PT).