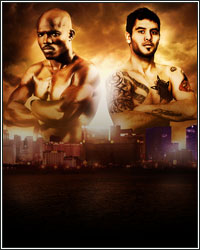 The six main event fighters will meet for the final time outside the ring at the Official Weigh-In for this all-action card, Tomorrow!  Friday, December 12, in  Gracia Ballroom 1 & 2, located on the third floor of The Cosmopolitan of Las Vegas (3708 Las Vegas Blvd. South, Las Vegas, NV. 89109).  Media and the public may report at 2:00 p.m., with the fighters stepping on the scale beginning at 3:30 p.m. PT.

Promoted by Top Rank®, in association with Golden Boy Promotions, DiBella Entertainment and Tecate, remaining tickets to the Bradley-Chaves/Herrera-Benavidez/Korobov-Lee world championship event are priced at $40, $60, $100, $125 and $150, and available for purchase at www.cosmopolitanlasvegas.com/ or through Ticketmaster at (800) 745-3000 and www.ticketmaster.com/.  Room / ticket packages are also available.