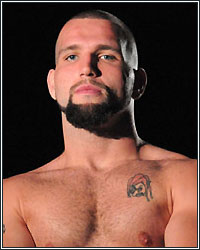 "Deontay Wilder, all he has is power. Szpilka was beating him up until the time he got caught. In my opinion, I thought Szpilka was beating him. The judges didn't have him winning, but I did," stated heavyweight contender Travis Kauffman, who is unimpressed with current crop of heavyweight champions. According to Kauffman, any one of them can be taken out on any given night and he's eager to prove that against newly-crowned IBF heavyweight champion Charles Martin.

"Charles Martin is very green and he's learning as he goes. He can punch. Tyson Fury is garbage. He's just big. Tyson Fury is very entertaining for the division and for the sport. He's like a WWE wrestler. He's all hype and he's a giant. It's a big man division, but he's a huge man. He is a giant, which is going to get him by in some fights, but I think Tyson Fury is garbage," Kauffman explained during a recent conversation with FightHype.com. "I think Wilder's best asset is he can crack! As far as Charles Martin, nobody really seen much of him. We don't really know because we didn't see much against Glazkov. I would love to fight Charles Martin. From what I've seen, I think I would knock him out. I know Wilder is looking for bigger things. He got some tough fights lined up. I think Charles Martin needs to prove that he deserves that belt. He needs to prove to the world that he deserves that belt."