GENNADY GOLOVKIN FACES DOMINIC WADE ON APRIL 23 AT THE FORUM 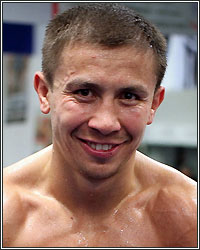 "I'm happy to fight again at the Forum in front of my fans and friends in Los Angeles. Dominic Wade is a very hungry and skilled middleweight who is undefeated and will be another big test for me," said Golovkin. "Thanks to my Coach Abel Sanchez, my promoter Tom Loeffler, my team, HBO and the Forum for another opportunity to defend my middleweight titles."

Stated Wade, "I am so grateful to be given the opportunity to fight 'GGG' for the IBF Middleweight Championship on April 23rd!  I've worked hard my entire career to get to this point.  I'm poised and ready to take on the challenge.  I thank my Manager Jerry Vines, #TeamWade and all of my trainers, opponents and supporters for preparing me for this moment."

"We're excited to announce Gennady's next world title defense against Dominic Wade along with his return to the Fabulous Forum, "said Tom Loeffler of K2 Promotions. "Since fighting at the Stubhub Center in October 2013, the Southern California boxing fans have embraced Gennady as the biggest ticket seller in the State and we're expecting another massive crowd and an outstanding night on April 23."

"The Fabulous Forum has been the Southern California home for decades to the biggest stars in the sports and entertainment world and we're honored to add 'GGG' to that distinguished list."

Stated Tom Brown of TGB Promotions about the world title fight, "Dominic is a young and hungry middleweight with an outstanding amateur pedigree that jumped at an opportunity so many have avoided"

"Knockout excitement in the ring has grown synonymous for fans with just one letter repeated three times, 'GGG,' and Gennady Gennadyevich Golovkin doesn't look to disappoint in his 2016 debut headlining a World Championship Boxing event from the historic Forum in Inglewood, CA," said Peter Nelson, Executive Vice President, HBO Sports.  "His challenger, Dominic Wade, has a career-defining opportunity in front of him to usurp stardom with an upset, and we know he will bring his A-game on April 23."

Said Dana Dufine of the Forum, "We're excited to welcome championship boxing and 'GGG' back to the 'Fabulous' Forum in April. Our reimagined venue boasts decades of rich boxing history and Golovkin added to that storied history with his knockout of Willie Monroe here in May. We, along with fight fans worldwide, can't wait to see him go toe-to-toe with Dominic Wade."

Following a memorable year which saw three outstanding knockout performances, Golovkin, (34-0, 31KOs) was lauded by numerous media platforms worldwide as the 2015 Fighter of the Year.

Commencing the year with a dominant performance on February 23, 2015 against #1 ranked contender, Martin Murray, Golovkin made his third appearance in Monaco where he has also become a fan favorite. Displaying his full arsenal of weaponry and with two earlier knockdowns of Murray, Golovkin earned the stoppage in the 11th round against the valiant native of the United Kingdom who had never been knocked down or stopped previously.

Three months later on May 16, Golovkin made his triumphant return to Los Angeles with a sixth round knockout of Willie Monroe at the Forum in front of a huge crowd of 12,732.

On October 17, before a sold-out crowd of 20,548 at Madison Square Garden, Golovkin dismantled IBF Middleweight Champion David Lemieux with an exhilarating eighth round stoppage in his fourth appearance at the 'Mecca of Boxing.'" After winning the title, the IBF ordered Golovkin to make his mandatory world title defense against the leading contender, Dominic Wade.

The 25-year-old Dominic Wade, (18-0, 12KO's), was an outstanding amateur as a four-time Junior Olympic Champion and a participant in the 2007 Olympic Boxing Trials.

In 2014, Wade was very active scoring four victories in dominant fashion. The Largo, Maryland native is coming off an impressive victory over former world champion Sam Soliman on June 26, 2015.

Use the hashtag #GGGWade to join the conversation on social media.