AMIR KHAN NO LONGER CONCERNED ABOUT MAYWEATHER, BUT AWARE A CANELO WIN AND 160 TITLE COULD ENTICE HIM 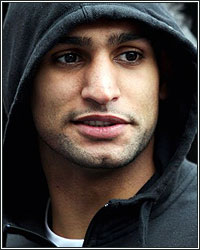 "I don't really know to be honest with you. Let's see. Look, me and Floyd, we don't look eye and eye to each other. He's in the U.K. as we speak now and a lot of people have been saying, 'Look, he's been saying good things about you.' He's not being disrespectful and I respect that," stated former world champion Amir Khan, who seems content with the notion that he may never get a chance to share a ring with the now retired Floyd Mayweather. For years, Khan had been hoping to land a fight with the undefeated former pound-for-pound king, especially when he became the number one contender to Mayweather's WBC welterweight title nearly two years ago. Unfortunately for Khan, that fight never materialized and he was left searching for another name that could define his legacy. Although he was also passed on as an opponent for 8-division former world champion Manny Pacquiao, Khan finally got the big fight that has eluded him for so many years when he landed the May 7 assignment against the newest pay-per-view star, Canelo Alvarez. Since the announcement of that fight, Khan has seemingly put Floyd Mayweather behind him, for now at least, and is now focused on defining his legacy by moving up in weight and accomplishing a feat that very few have done.

"Floyd's a very good fighter and it'll always been an honor to fight someone like Floyd Mayweather, who's been on top of his game for years and years and who's done great things in his career. I mean, it would be great and, like I said, it would be an honor to be in the ring with someone like him who's done something that no other fighter has done. So, yeah man, I think that fight could happen once I beat Canelo, but I'm not looking past this fight," Khan explained during a recent conversation with FightHype.com. "I'm taking it fight by fight. If we meet one day, we meet one day; if we don't, look, I just want to keep it mutual because end of the day, we want to keep that mutual respect there. He's done great things and more than likely, we're all Floyd Mayweather fans. We all look up to the guy. He's done a lot, so I'm not going to be one to say I'm not a fan or I don't like the guy. We all like him; we think he's a great fighter and what he's done in the boxing ring, I do respect what he's done in his boxing career."

Although he hasn't completely ruled out a fight with Mayweather should the undefeated fighter ever decide to come out of retirement, Khan appears to have buried the hatchet with the man he's been chasing after for so many years. He added, "Obviously when there was talks about me fighting him, I had to kind of gear myself up and not be the nice guy, but look, deep down, I never disrespect any fighter. I always have respect for all fighters. I never want to be seen as that type of fighter who disrespects other fighters and fights. If that fight happens, it happens; if it doesn't happen, I've got a lot of respect for Floyd. I think he's done great things. Like I said, he's going to go to Bolton, to my city, and I hope he gets a nice welcome over there."