AMIR KHAN CONFIDENT HE AND CANELO WILL DO MORE PPV BUYS THAN PACQUIAO-BRADLEY 3; RESPONDS TO ARUM'S PPV DISS 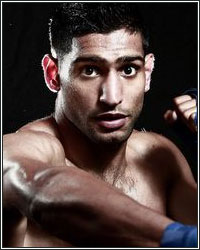 "Can you believe that? The reason the Pacquiao fight never happened is I think Bob knew that I'm too dangerous for him. Even though me and Manny are friends, I think that would've done great numbers, having the past history with Freddie Roach and everything. But this is a massive international fight as well. It was so unexpected," stated former world champion Amir Khan, who is confident that his intriguing May 7 clash with Canelo Alvarez will do more pay-per-view buys than the April 9 rubber match between Manny Pacquiao and Timothy Bradley.

"I really believe we can hit some big numbers on this and honestly, I really believe that I can beat Pacquiao-Bradley numbers. I don't know what Bob Arum was saying that we're going to do bad numbers," Khan commented during a recent conversation with FightHype.com. The amount of hype that's in this fight, you have to say that the hype's huge and people are interested in this fight. Look, people don't know what to expect because you've got speed, explosiveness, and movement versus a guy who's powerful, you know, and this is a boxer versus a fighter."