ARTHUR ABRAHAM ON GILBERTO RAMIREZ CLASH: "THIS IS GOING TO BE MY GREATEST VICTORY" 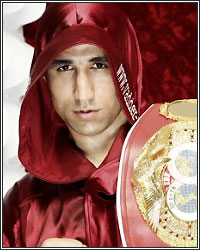 "This fight is a dream come true for me. I fought in Hollywood, Florida vs. Edison Miranda, against Andre Dirrell in Detroit, and vs. Andre Ward in Carson, California. But the flair of a big-time event was missing. I was at Manny's fight vs. Shane Mosley at the MGM Grand in 2011 and the atmosphere captured my imagination. Afterwards, it was my wish to one day step into this very ring and on April 9 I will finally get the chance to share the spotlight with the Pac-Man," stated WBO super middleweight champion Arthur Abraham, who shared his thoughts on his upcoming title defense against undefeated contender Gilberto Ramirez.

"I do not take a win that night for granted, as Gilberto Ramirez is a young upcoming boxer from Mexico, one of the greatest fighting countries. He wants to write history by becoming the first Mexican to win a world championship at super middleweight," explained Abraham, who hopes to finally come out victorious on a large international stage after falling short in previous attempts against the likes of Andre Ward and Andre Dirrell. "But myself being an Armenian, living and fighting out of Germany, I have two values to fight for: pride and honor. I will go into this fight with the following words on my mind: 'Mejor morir de pie que vivir arrodillado!' This is going to be my greatest victory. Thank you!"