TEOFIMO LOPEZ FLEXES ON LOMACHENKO; GETTING ROCKED UP FOR SHOWDOWN: "LOMA IS THE SIZE OF MY BICEP" 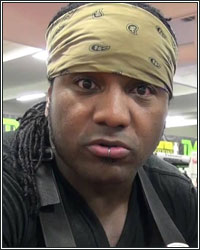 "Things are going fantastic. You know, he's ready to fight and ready to be victorious on March 5th...My boxing record as a coach is very good. I have a Bill Belicheck winning percentage right now. This is nothing new to me. It's a normal day at work to me. I'm just excited to be at the same place, having another World Championship opportunity at the DC Armory. It's on, man. It's going to be a good night for Team Varga," stated Dewey Cooper, world-class trainer of former world champion Jesse Vargas, who talked about their upcoming March 5 clash with Sadam Ali. Check it out!

JR: Heck of a task in front of you going against Sadam Ali and Andre Rozier in your first fight with Jessie Vargas. How are things with you and Jesse going as camp winds down?

DC: Things are going fantastic. You know, he's ready to fight and ready to be victorious on March 5th.

JR: Not too many people know you well outside of your experience in fighting in K1, Kickboxing, and coaching in Las Vegas, however, you have a very successful boxing record and are getting an opportunity to make your name even bigger as a boxing coach. What do you make of it?

DC: I've been fighting since I was a 10-year-old kid. I've had a long kickboxing amateur career, a long professional kickboxing career, which I'm still actively doing. I've fought in professional MMA for Strikeforce and in professional boxing, I have over 25 professional fights with 19 wins and only 3 losses. As a coach, I had my first world champion in 2001 in Jessica Rakozy that I won 7 world titles together with. I've been training people a long time. I've been blessed to train several guys too and with successful records. I was with Beibut Shumenov's camp for several years. I have three Uzbekistan fighters to win Intercontinental titles. My boxing record as a coach is very good. I have a Bill Belicheck winning percentage right now. This is nothing new to me. It's a normal day at work to me. I'm just excited to be at the same place, having another World Championship opportunity at the DC Armory. It's on, man. It's going to be a good night for Team Vargas.

JR: It's been said that Morales didn't want to train Jesse due to late notice. Not too sure that this is true, but do you feel any kind of extra pressure as a coach to take in a completely new game plan going in at the last minute as well?

DC: Man, I live by a simple creed. It's called K.I.S.S: Keep It Simple Stupid.  I don't believe in pressure. Pressure is when a person puts too many expectations on their self. If you believe in yourself, if you're comfortable in your ability, then there is no pressure. I take this same creed when I fight and I take the same creed when I coach, so there's no pressure. One man's loss is another man's gain. I'm not sure what happened in that situation with Jesse and the legendary Erik Morales, but I'm thankful that Jesse reached out to me and entrusted me to help him win his second world title. It's an honorable thing, but I'm going to "Keep It Simple Stupid" and prepare my fighter for success on March 5th.

JR: Jesse has been through multiple trainers in the last few years. Even though you've know Jesse since he was a kid, at any time, was the fact that he has had multiple trainers a question mark for you, and what was it that made you want to take on the task in preparing him for this bout?

DC: Because I'm a multi-time world champion in kickboxing, so something that seems tough and complex for most people is a simple opportunity for me. I'm not going to worry about who, what, when, or how. I'm worried about my opportunity and to try to make it best for myself and whoever I'm training. I love Jesse and I'm doing my best to prepare him for a victorious night and I'm very confident that is what's going to happen. We've had a tremendous camp, we've made great strides, and we have great synergy with everyone happy. Everyone has one goal and that's what we're going to see through on March 5th. It's not about me; it's about the fighter. I'm there to enhance what Jesse does and get him better at things he doesn't do too great. That is my role and it's that simple. It's about Jesse. If I don' ever get known as a trainer, it doesn't matter to me because I know the guys I work with. They love the energy that's brought to the table and they love the communication that we have with one another. I'm not doing this for fame or money. I'm doing this for the childhood love I have for competing in martial arts. I'm not a boxer. I'm a goddamn martial artist! I'm a World Champion Kickboxer who knows how to box and knows how to Cage fight. I'm not doing this for anything but the dream that I have for my soul. I keep it simple stupid. It's about Jesse Vargas and I'm really honored to be on his goddamn team.

JR: What are some differences that you're seeing with Jesse from the beginning of camp up until now that will play out for him well for the fight?

DC: All I can say about that is elevation, meaning improvement in every aspect. Elevation as a human being spiritually, mentally, and physically. I'm keeping it as vague as possible.

JR: Have you had to split time in working with the other guys that you train with Jesse Vargas this time around, and if so, how has that been?

DC: Absolutely not. People tell me I'm the busiest man in the world. I have no life. I have a great girlfriend that allows me to work all day and not spend much time with her. I don't split time. I have a rule that I train all my guys hard like it's the last day of our motherfucking lives. Everyone gets their time in, man. I literally train all fucking day and don't do anything else. When Jesse called me and said, "Dewey, let's link and see if we can do something and make it make it happen," I just took more of my personal time out of the equation. The only rule is whoever is up next gets the priority scheduling. I will spend the whole day to get every fighter in so that no one feels left behind on the train.

JR: I'm looking forward to this match-up, Dewey, and I appreciate your time.

DC: No problem, man. Thank you.