LUIS DEL VALLE: "WE WANT TO BE IN CONTENTION TO GET A TITLE SHOT...I'M COMING TO FIGHT AND NOT TO DANCE" 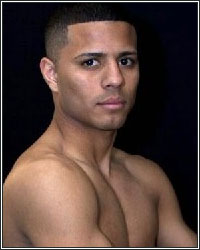 "We're definitely looking to do two more fights before the year is over. We want to be in contention to get a title shot at some point next year. Our goal is to fight for the world title no later than 2017...I'm coming to fight and not to dance, so every time you see me, you will get your monies worth," stated super bantamweight Luis Del Valle, who talked about his recent win, his future plans, and more. Check it out!

PC: Congratulations on your win over Thomas Snow. He was a tough dude, man. How do you think you performed?

ODV: The night of the fight, I wasn't happy at all with my performance. It was a very, very rough fight and Thomas Snow came out to fight. I wasn't happy with my performance. I would say a C- or something like that. But I watched the tape and I gave myself a B- or C. He was a very tough opponent and I did not lose my composure at any time. I dictated the pace of the fight and everyone knows when a right-hander fights a southpaw, those styles do not match and it makes it difficult. We stayed strong throughout the whole fight and we pulled it off.

PC: Do you prefer not to fight southpaws?

ODV: It comes with the territory. I'm not the only fighter out there that's uncomfortable fighting southpaws. If I have to do it like this time, then I'll just have to do it again and I will make the adjustments just like I did in this fight. I'll do whatever it takes to come out with the W.

PC: Did you expect him to be as durable as he was or was he exactly what you expected?

ODV: I mean, I knew I was going to get the best Thomas Snow that he can be. He was a local and also it was a crossroads fight for both of us. This fight was supposed to be scheduled a month earlier, so we all knew at Team Del Valle that he was going to come better prepared for the fight and he did. He finished out the fight. I got a lot of respect for him and I tip my hat to him because he tried his hardest to try and win.

PC: You scored some knockdowns early and once you saw he wasn't ready to go, I thought you did a good job at keeping your composure.

ODV: Yeah! The thing is that going into the fight, I feel I'm a veteran and going into the fight, as I dropped him, I saw that he got up on shaky legs. I did try to push a little bit, but he was in tremendous condition and I noticed he got his feet underneath him right away, so I did not go crazy. And then in the 3rd round, I dropped him with a counter left hook, but these are the kind of knockdowns that stun you and get you down, but they don't hurt you like that. There are some fights where I have hurt my opponents and when I see them, I see that they are out and it's just a matter of pushing. But this fight, I got him down, but he was in such tremendous shape that he was able to recover right away. So by me knowing where he was at, I was able to know when to push and plan my attack.

PC: You have performed well in both of your fights this year. How soon are you looking to get back in there and how many more times can we expect to see you this year?

ODV: We're definitely looking to do two more fights before the year is over. We want to be in contention to get a title shot at some point next year. Our goal is to fight for the world title no later than 2017.

PC: This is probably the most talked about the smaller guys in the lower weight classes have been in quite some time. What do you think of the 122-pound division and the state of it right now?

ODV: The 122-pound division is stacked with talent. Everybody coming up just like me, from prospects to contenders to former world champions; anybody at 122 can be a world champion. It's a wonderful thing because it's a lot of competition and I'm up for it.

ODV: We had two fights back-to-back in April and May; we have actually been training since January. I was talking to my advisor this morning and it looks like we will be back some time in August or September. We happy with that. We stayed busy with the two quick fights; now we'll take a little break, a few days off, and then get back at it in August or September.

PC: Hey man, I appreciate the time. Congrats again on the victory and I look forward to seeing you back in there. Is there anything else you want to add before I let you go?

ODV: It's a pleasure to be with you guys and it's an honor and hopefully this becomes a regular to be with you guys. To all of the guys out there, be sure to tune in for Orlandito Del Valle and like Orlandito on Facebook or follow me on Twitter and Instgram @Orlanditoboxing. It would be my pleasure to keep everybody updated with anything that is going on with me and I'm coming to fight and not to dance, so every time you see me, you will get your monies worth; stay tuned!