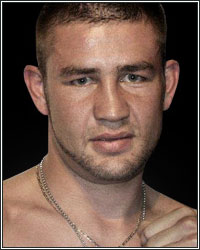 "Conor comes with a boxing background. I was surprised how well he could handle it. His boxing is really not bad. I'd say after a full training camp where the focus is 100% boxing, he might just shock a lot of boxing fans...He has a very good eye for timing and counter punching. I can tell you this, he will give a few boxers out there a really good go," stated welterweight contender Chris Van Heerden, who spoke about his sparring sessions with UFC featherweight champion Conor McGregor. Check it out!

SS: Footage of your sparring session with Conor McGregor has gone viral at a time when the Mayweather vs. McGregor fight is a hot topic. How did sparring with Conor come about and how did the video get out?

CVH: The footage getting out shocked me as I had nothing to with it! I was in the gym 2 weeks ago and next thing I see is Conor walking in. We talked a little and he found out I'm southpaw and asked if I will assist him with rounds in the days to come. My reply, "It'd be my honor." Once it was out, I found out that Conor's team gave the thumbs up for it to be out there, but I had nothing to do with the footage that came out.

SS: Based on your experience with him, what are your thoughts on Conor's boxing ability?

CVH: Conor comes with a boxing background. I was surprised how well he could handle it. His boxing is really not bad. I'd say after a full training camp where the focus is 100% boxing, he might just shock a lot of boxing fans.

SS: I seen he had a decent boxing background in Ireland. From your experiences, where is Conor's boxing lacking at the moment? Where are his weaknesses, because the fight he is being rumored with is against a man who makes even the best look average?

CVH: I'd say he needs work on his footwork. Placing of feet and balance and knowing when to throw the right punch; not just throw anything out there. He has a very good eye for timing and counter punching. I can tell you this, he will give a few boxers out there a really good go.

SS: Absolutely his timing has been proven in UFC to be on point. Power-wise, how was his power? Is it something that you believe would give him a chance against Floyd Mayweather or did you expect a bit more power from him?

CVH: We were sparring with 16-ounce gloves. It's like pillows (laughing), so it's hard to tell. I was not at any point shocked. Maybe I did expect a little more power. I will say this, Conor can throw and he has a puncher's chance. He might just land on the spot once and it could mean trouble. But Floyd is TBE, 49-0 for a reason.

SS: (Laughing) I hear you, and anybody stepping in with Floyd will find it difficult. Did Conor speak to you about the Floyd fight or did he strictly keep it about getting the rounds in?

CVH: There were no talks about the fight.

SS: If this fight does go ahead, how do you see it going? Do you think Conor can polish up his weaknesses to make it a fight or do you think Floyd makes easy work of him?

CVH: After a good clean-up on skill, he will be in there for a few rounds, but the truth is Floyd will have his way. He is the master of boxing. No one beats Floyd.

SS: So you think Floyd stops him relatively early?

CVH: Depends on what Floyd wants. I Feel Floyd can pick at any time when he wants to end it.

SS: I hear you. There are mixed feelings about that fight taking place. What are your thoughts? Is it good for both sports or is it just a glorified exhibition match? Will it sell well you think?

CVH: Will it sell? Yes, it will bring in huge money I think. Should it really happen? No, just my own opinion

SS: If you don't mind me asking, why do you think it shouldn't happen? Based on the competitiveness or you just believe these sports should stay separate?

CVH: Because it's a boxer with 49-0 experience against a 0-0 experience guy as a pro boxer. There's guys that box their whole life hoping to get a shot against Mayweather that really deserves it more, but money talks. McGregor is the biggest name in MMA and if you're wondering if I will by the pay-per-view, yes, I will. I have respect for Conor, I do. Who do you pick?

SS: Personally, I think Floyd would take him apart. I think the intrigue of the fight is capturing people's imagination because it's a unique situation. Floyd, as always, is in a no-win situation. People call for him to fight a fighter, he wins, usually quite comfortably, and there is usually a reason to criticize. This will end up the same, so Conor's comment saying, "Floyd needs him," I don't believe so. Just my opinion.