CUB SWANSON CONTINUES QUEST FOR UFC TITLE SHOT: "I PUT IN ENOUGH TIME, I PAID MY DUES...MY TIME IS NOW" 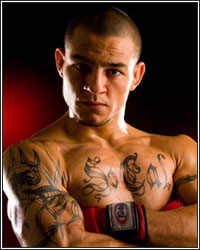 "We fought once before. It wasn't a great fight for me and he did well and got the best of me that night, but I know I'm better than that. I know I have gotten better since then and that's the fight I want. I put in enough time, I paid my dues, and I've been promised enough times. I think my time is now," stated UFC featherweight Cub Swanson, who continued to state his case for a title shot against champion Max Holloway. Check it out!

PC: Max Holloway stopped Jose Aldo to become the lineal champion at 145 pounds. What did you think of that fight and the end result?

CS: I thought it was a great fight. A lot of it played out like how I thought and some things surprised me. But I thought both guys showed a lot of tools and Max Holloway just turned it up and got his rhythm at the right time and shocked the world.

PC: Was it a matter, in your opinion, of Max Holloway being that good or do you think we are starting to see the end of something great?

CS: I just think that Jose has done so well with fighting his fight for so long; I wouldn't really say he evolved. He's always kind of stuck with what's made him great and just continued to dominate. And I think the younger fighters have just become so versatile and so good and are so young that it's kind of a new era.

PC: Is the Max Holloway title shot the fight you want next or being that he just fought, would you be willing to take another fight in between to stay busy? What's on your radar?

CS: Oh, that's definitely the fight I want. We fought once before. It wasn't a great fight for me and he did well and got the best of me that night, but I know I'm better than that. I know I have gotten better since then and that's the fight I want. I put in enough time, I paid my dues, and I've been promised enough times. I think my time is now.

PC: I have been talking to you for a very long time, way before you were in the UFC. What would it mean for you to not only fight for a world title in the organization but to capture one?

CS: I keep saying...I don't think it would mean as much to anybody else as it would to me because nobody has gone through my struggles; the injuries, the setbacks and everything that I've had to go through. I don't think another fighter has had to go through that to get to a title fight. I've been with the company for 10 years and there have been 19 featherweight title fights in that time since I've been with the company, so to say that I have waited my turn or something like that, I've been right there in contention almost the entire time, so I think if I get the opportunity and win it, it would just mean so much more to me than anybody else.

PC: You are on a 4-fight winning streak, consistent with bringing exciting fight after another. Do you feel a rematch with Max Holloway is what you need to bring out the best Cub Swanson that we have seen?

CS: Oh, for sure he's going to bring out the best in me. He's talented, he's got a gas tank, and he's got tons of confidence right now. So to beat him, I would have to show up at my best. I'm confident I can do that and I think us both being standup guys, the fans love seeing fights like that.

PC: Obviously you feel like you've made some changes and you have changed as a fighter in general since the first fight. Do you feel Max is a different fighter as well or the same fighter, just more confident?

CS: I think the only difference in him is just his confidence and really just understanding his game. That's huge; people don't really understand how huge that is. His confidence is really high right now and anybody stepping up, it's going to be a challenge for them.

PC: You have won 10 of your last 12 fights. As I mentioned before, most of those fights were either spectacular finishes or just overall exciting fights. What has been the keys to your consistency as far as what we are seeing from you now?

CS: It's just coming into my own. The last little win streak I had before this, I was really coming into my own, being creative and doing all of these things. And then I had two losses that set me back from title contention and I just kind of had my passion taken away after being denied a title shot so many times. I wasn't emotionally invested in it and I just felt so let down. So trying to go out there and fight without passion is just not me. I found that passion again. I even got a sports psychologist to always keep me focused on the things that are important and that's brought out the best version of me that we've ever seen in these last 4 fights.

PC: Given the perfect case scenario for you, when would a Max Holloway-Cub Swanson fight come to fruition for you?

CS: On the big pay-per-view towards the end of the year. I got a baby coming in August. I want to get through that and enjoy that and then have a really good training camp to be able to do a championship fight.

PC: I appreciate your time. I hope you can land that title shot against Max and congrats on the new addition coming in August. Is there anything else you want to say before I let you go?

CS: Just keep watching and keep pushing for me to get that title fight. I deserve it and I appreciate all of my fans out there.