ED HERMAN: "I WOULD LIKE A REMATCH WITH BELCHER RIGHT AWAY" 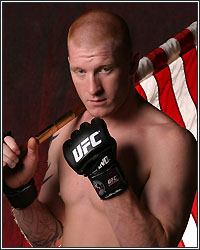 "Alan is one of the guys I wanted to fight because I thought it would be a good matchup. I thought it would be fun to stand and fight with him. I knew he would fight meI would like a rematch with Belcher right away if I could, but we'll see what happens," stated UFC middleweight Ed Herman as he talked about his strong desire for a rematch with Alan Belcher. Check out what he had to say about their fight, his performance and much more.

PC: How are you doing my man?

EH: I'm good man, you know? I'm just trying to recover and fucking get back on my toes.

PC: Did you come away with any injuries from the Belcher fight?

EH: No injuries. I'm just a little sore. It was a pretty long war so I'm a little banged up.

PC: It didn't seem to bother you, but he landed some nice leg kicks during the fight. Were you just acting really good or were you not affected by them?

EH: It didn't bother me too bad during the fight, but I can feel them today (laughing).

PC: Every round was close, but I actually had you up 3-0; at worst 2-1. How disheartening is it to lose a close fight like that?

EH: It sucks. I'd probably rather be knocked out, but it sucks to lose like that for sure man. It really sucks.

PC: What was your mindset going into the 3rd round? How did you have it scored?

EH: I thought I had done enough to win the fight, but, you know, you fucking leave it up to the judges and I guess that happens sometimes. I'm not happy about it, that's for sure.

PC: Was the gameplan going into the fight to stand and bang with Belcher to set up takedowns or did you just want it to be a standup fight?

PC: I had it pretty even on the feet. Although he landed the harder shots, you always returned fire. Do you think the difference in the scoring should have been your submission attempts and your takedowns?

EH: I think so. Like I said, I should've done a little bit more just to make it to where there was no doubt. If I would've used my wrestling just a little bit more and used my ground and pound a little bit more, I think there would have been no doubt. I let it be that close man. Like you said, the standup was pretty even. He caught me with some big shots and I caught him with some, so it's hard to say, you know?

PC: Yeah, I just think every time he landed, whether it was a big shot or not, you returned fire and threw something right back.

EH: Yeah, I came right back off of everything.

PC: You've been here before Ed. You've come off of 2 losses and went on a 3-fight winning streak. How do you bounce back from this? Where do you go from here?

EH: Just go back home and work on the things I need to work on. I'll watch the tape and go over the mistakes I made and get back on point; look to fight again as soon as I can. I need to whoop somebody's ass and get back on the winning page.

PC: Is there anybody in particular in the middleweight division you would like to fight next?

EH: There are a lot of guys I would like to fight. Alan is one of the guys I wanted to fight because I thought it would be a good matchup. I thought it would be fun to stand and fight with him. I knew he would fight me. Not to take anything away from Maia, but he didn't want to stand and fight. He wanted to take it to the ground and submit me so it was nice to fight somebody that wanted tot throw down and fight. There is nobody necessarily in particular. I would like a rematch with Belcher right away if I could, but we'll see what happens.

PC: Other than those shorts that he wore, was there anything about Belcher that surprised you?

EH: I knew he would wear shorts like that (laughing). Nah, he didn't surprise me. He was a little stronger than I thought. He had a good gameplan and he moved his feet real well and he did a really good job so I give it up to him for that. He's always improving. He's a young fighter and I hope he'll be a strong force in the UFC for a while.

PC: We recently lost a former UFC middleweight champion in Evan Tanner. What was your reaction to his death?

EH: It's a bummer to see what happened to Evan. Yeah, it's a bummer. Evan was one of the first guys I ever trained with; him and Randy back in the day. So he was like a big brother to me in a way. But he was always kind of a wandering soul man. He was always kind of lost so maybe he's in a better place and he's happier.

PC: Well, thanks for the interview. It's always good to rap with you. I know you will be back strong. Is there anything you want to say in closing?