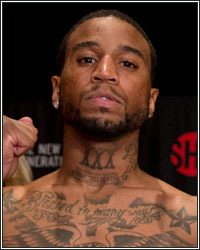 Wade was a four-time Junior Olympic Champion and a participant in the 2007 Olympic Boxing Trials.

He turned professional on March 14, 2009 with a 1st round stoppage over undefeated Chris Davis (3-0).  Wade climbed up the rankings with victories over Michael Faulk (2-0), Grover Young (4-0), Nick Brinson (16-1-2) and former world champion Sam Soliman.

Those wins catapulted Wade to face unified Middleweight world champion Gennady Golovkin on April 23, 2016 at The Forum in Inglewood, California.

Wade suffered his only professional defeat in that fight, and has not fought since the world title opportunity.

"I am excited to get back in the ring, and the show the world what I got.  I will get back to the top of the rankings, and do it better, and more proper this time." said Wade.

"It is time to show the world that I am back.  I want to take my time until the big fights come up.  I can see me in fights against Canelo Alvarez, Golvkin, Daniel Jacobs, Jermall Charlo, Demetrius Andrade or any of the other top middleweights out there.  I feel that after a couple of fights, I will be up there with the top names in the division.  I am just excited to do my thing.  I got to the top of the rankings with just natural talent.  Now I have a good team behind me with GH3 Promotions, I have a great work ethic, and I am back with my original trainer Adrian Davis.  I feel the best is still ahead of me."

"I feel that we can get Dominic back to the top really soon.  I plan to have him fight November 17th in Indiana, then I want to bring him back in December in New Jersey, and a 3rd fight in January, that will get him in a fight that will get him in position.  He has always had the talent, now he is with us, and we will have him on a schedule to get him back in the rankings, and eventually another world title shot," said Vito Mielnicki of GH3 Promotions.