REFEREE BILL CLANCY KEEPS IT REAL ON WHAT IT WAS LIKE TO OFFICIATE JULIAN WILLIAMS' WIN OVER JARRETT HURD: "A HECK OF A FIGHT" 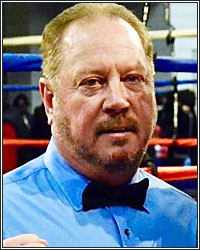 “I could have broke the rhythm of that fight numerous times and I did not want to do that. It was no harm, no foul, both guys got as good as they gave, and nobody complained...you strive and work your butt off to try and be invisible and be that guy that let’s the fighters fight. It’s their fight, it’s not my fight. I’m just honored to be in the ring with them. Man, I tell you, I will say this, in my 38 years of refereeing, in my opinion, this is the best fight I have ever refereed,” stated referee Bill Clancy, who shared his thoughts on what it was like to officiate Julian Williams' win over Jarrett Hurd. Check it out!

PC: Bill, you have a heavily scrutinized job and you guys catch so much heat. That said, after the Julian Williams and Jarrett Hurd fight, I saw a lot of people on social media giving you a ton of credit for the job you performed as the third man.

BC: I really appreciate that. Thank you very much.

PC: Going into a fight like that, we know Hurd is a pressure guy and we know Williams is not going to back down. Do you study those type of facts pre-fight?

BC: Absolutely! I want to know a little bit about the guys. I don’t want to know too much, but I do want to know kind of how they fight. The last thing that I want to do is over-officiate a fight. I don’t think any referee wants to over-officiate, but at the same time, we got a job to do, there are rules that we have to enforce, and our job is to protect the fighters, keep them safe, and let them do their jobs. Going into this fight, I knew it was a huge fight for both guys, and it’s funny because in the final instructions in their respective dressing rooms, both camps said, “We want to fight on the inside. How do you feel about guys fighting on the inside?” I don’t know if you know this, but a lot of referees, I don’t know if they panic or what, but when guys are fighting on the inside like that, if their hands are free and they’re working, sometimes referees intervene and I don’t know why. I think that’s what their concern was on both sides. But they wanted to be assured that if they did fight on the inside, that I would not do that, and I assured both camps that I would not do that. I’ve always been kind of known for that. I let guys fight. I knew it was very important to both of those guys or they would not have mentioned it to me. I assured them both that if they fought clean and their hands were free, I would let them fight. And as you saw, they were fighting a lot on the inside. Most of that fight was fought in very close quarters. Was there some dirty boxing? Yeah, shoulder bump here, borderline low blows on both sides, but you know something, neither guy complained. There was a moment, I think it was the 8th round, where they showed a shot, I was on the opposite side and Julian Williams threw a left hook and it look like it landed a little low. But there was no reaction from Jarrett Hurd. Again, I was on the blindside. You try to stay on the open side, but I can’t be everywhere at all times. I can’t be in the perfect position at all times. I was in position, but these guys know where I am. He threw somewhat of a low punch, I cautioned him and let the action stay the way it should’ve stayed. I could have broke the rhythm of that fight numerous times and I did not want to do that. It was no harm, no foul, both guys got as good as they gave, and nobody complained. So if the fighters aren’t complaining and they have shots landing, and there were some good shots being landed, then I’m not getting involved and I’m glad I didn’t because it was a heck of a fight.

PC: That it was. Sometimes referees can play their part in what turns out to be great fights. The late, great Frank Cappuccino comes to mind during the first fight between Arturo Gatti and Mickey Ward. Also Steve Smoger during the fight between Mickey Ward and Emmanuel Augustus. The way they went about officiating those fights was a direct result of those fights being classics.

BC: Let me give you another classic example, and this is one of my favorites fights from one of my dear friends and colleagues Tony Weeks; Castillo-Corrales. That was back and forth, back and forth, and you could have made an argument that he could have jumped in earlier, but he didn’t. He didn’t jump in earlier. He let that thing come to a logical conclusion and he stopped it at the perfect time. Castillo dropped his hands and he was defenseless and Tony jumped in there. That’s another example of a really seasoned referee who knows what he’s doing and he let the fight come to its natural conclusion. That’s what I strive for each and every outing. I don’t want to be a factor in a fight. I have been a factor in world title fights by doing my job, having to disqualify or take points, and I don’t want to do that. Nobody does. But you strive and work your butt off to try and be invisible and be that guy that let’s the fighters fight. It’s their fight, it’s not my fight. I’m just honored to be in the ring with them. Man, I tell you, I will say this, in my 38 years of refereeing, in my opinion, this is the best fight I have ever refereed from a standpoint of action, standpoint of importance, and I didn’t get cussed out (laughing). Nobody said, “Bill Clancy did a lousy job,” so I was happy with the performance. Hats off to Julian and Jarrett, two gentlemen, two warriors. The night belonged to them and they showed out. Tony deserves to be on the big stage because of who he is and what he has done for the sport. God bless him because he does a hell of a job. I don’t have as many opportunities as those guys, but I just thank God for the limited opportunities that I get. I try to make the most of them and so far, so good. I’m just very thankful.

PC: Was there anything that the camps put you notice of pre-fight? Were there things that you were looking for at the request of either camp?

BC: No, just the normal stuff. Watch the head...he likes to hold. Normal stuff, but I never listen to that crap. I know what I’m looking at when I get in there. I did my homework. I just say, “Duly noted.” If that happens, I’m going to do my job, don’t worry about it. They can say whatever they want, but unless I pick it up doing my little homework beforehand, if I know a guy has a tendency of doing something, but you know, everybody tries to get an advantage; it’s a huge point in their career. If they think they can get into a referee’s head, God bless them, they are going to do it. Both camps were very respectful, so it was just the general routine stuff; things you hear all of the time and you take it with a grain a salt and if it happens, you address it and if it doesn’t happen, no harm, no foul, and let’s go to work.

PC: When I’m at a live fight, it’s a lot different than watching at home. I feel you miss things at live fights sometimes. Being that you were the third man in the ring, could you sense how special that fight was?

BC: Yes! Absolutely! It’s few and far between when a referee gets in with two guys and, don’t take this literally, but you got two guys, one who has never been off of his feet; he gets put on his butt for the first time. Both guys are very highly-skilled and very highly-motivated; not to say that any other fighters aren’t, because they are, but styles make fights and these two guys' styles complimented one another and man, I was just so happy to be that third guy and to witness these guys at the level they fought at. They fought at a very high pace and a very high level the whole time. It was very, very special, and I saw it unfold in front of me. I just stayed focused and stayed close and made sure those shots that were a little bit low, I wasn’t going to get involved. They gave as much as they got, but not enough to get me involved and be a factor in the fight. I recognized very early on that this was going to be a special fight.

PC: Bill, I appreciate the time and it was great to see you on the big stage doing what you do best because I’m fortunate enough to see you often on the gulf coast, but for the fans who aren’t as fortunate, I’m glad they got to see you shine.

BC: That means a lot, man, because we always hear what screwed up job we did and not often do we get the nice words. So I want to thank you a lot for recognizing it and pointing it out. It means a lot.