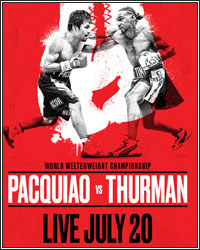 Hard-hitting Filipino welterweight Jayar Inson has stepped in to battle former world champion Sergey Lipinets in a 10-round fight on the undercard of the Manny Pacquaio vs. Keith Thurman WBA Welterweight Championship showdown headlining the PBC on FOX Sports Pay-Per-View event this Saturday night at the MGM Grand Garden Arena.

John Molina Jr. was originally scheduled to face Lipinets and withdrew from the bout due to a back injury. He was coming off a close unanimous decision loss to Omar Figueroa in February.

The 28-year-old Inson (18-2, 12 KOs) is coming off a split-decision loss to Jonathan Steele at MGM Grand in Las Vegas on the undercard of the Manny Pacquiao vs. Adrien Broner on January 19. The southpaw is from Davao City, Philippines and was schedule to fight Mexico's Mahonri Montes in an eight-round bout on the off-TV undercard.

Lipinets (15-1, 11 KOs) is coming off a "Fight of the Year'' performance against former two-division champion Lamont Peterson in March. A former 140-pound world champion from Kazakhstan, who grew up in Russia and now lives in Los Angeles, Lipinets pulled off an impressive 10th round TKO victory over Peterson in March in one of 2019's best fights.