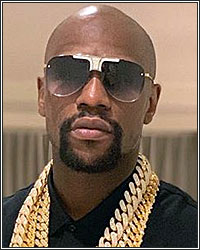 Earlier today, a video of Mayweather surfaced on social media where he can be seen telling the camera, "It's an honor to come to Saudi Arabia to sit down with you guys to talk about the Mayweather-Pacquiao rematch." Without doing any research whatsoever on the source of the video, several media outlets assumed it was new and wasted no time in crafting misleading headlines. FightHype.com, however, reached out to Mayweather himself to set the record straight.

"I talked to them about me fighting there, just different fights, but they wanted me to specifically say Manny Pacquiao," stated Mayweather himself, who confirmed the video was shot nearly 9 months ago as a promo in the weeks leading up to a trip he took to Saudi Arabia back in January. "And actually, we didn't just talk about boxing; we talked about different events; us bringing different events out there."

As for the rematch itself, fans shouldn't hold their breath. "Basically, that's an old video. At the end of the day, there's no talks about me and Manny Pacquiao fighting a rematch. Even if we did fight, all they're going to do is have an excuse, just like the first time," explained Mayweather, who seems perfectly content with retirement and the fact that he got the job done right the first time they fought. "The first time, you know, he can raise his hand after the fight is over, then all of a sudden, his shoulder is messed up. Excuse after excuse, you know what I'm saying. A real champion, you know, he takes his wins like a man and he takes his losses like a man. But as far as me and Manny Pacquiao, as of right now, it will never be a rematch," Mayweather reiterated.