RYAN GARCIA ON FIRE; AS REAL AS IT GETS ON "CHASING DOWN" TANK CLASH: "GERVONTA DAVIS, YOU'RE A B*TCH" 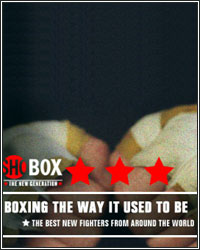 The taller and longer Russian Shishkin (9-0, 6 KOs) outworked an overmatched Ware in the main event as Ware’s trainer Lamar Wright threw in the white towel signaling surrender at 2:40 of the eighth round.

“I was surprised that Ware didn’t go down,” Shishkin said through an interpreter. “A couple times I stopped attacking because I thought he was going to go down, but he didn’t. He is a very tough fighter.”

With SugarHill Steward of the new Kronk Gym in Detroit working his corner, Shishkin impressed the enthusiastic Broken Arrow crowd with his performance against the former University of Toledo football player and current firefighter Ware (13-2-2, 8 KOs), who was fighting for his third time on the prospect series.

“I thought it would be easier than that against Ware,” Shishkin said. “I feel like I did some things well and some not so good. I was missing a lot of right hands. I missed more punches than I ever had before.

“I want to keep moving up the ranks and fighting in bigger fights until I become a world champion. I hope the fans liked what they saw. I wasn’t able to use everything I learned training in Detroit, but I did learn a lot and it made my performance that much better.”

In the co-feature, undefeated super lightweight Shohjahon Ergashev (17-0, 15 KOs) of Uzbekistan showed off his powerful punching arsenal in a fourth-round TKO against Mexican Abdiel Ramirez (24-5-1, 22 KOs). After a series of unanswered power punches and with Ramirez against the ropes, referee Gerald Ritter waved off the fight two minutes into Round 4.

“I wanted to fight 10 rounds, so I didn’t come out as strong as I usually do,” said Ergashev, ranked in the top-10 in three of the four major sanctioning bodies. “I wanted the work this time. I probably could have finished him earlier, but I didn’t. It gave me a chance to use all my weapons. I didn’t learn anything in some of my other fights because they were over too quick.”

With Steward also working Ergashev’s corner as he did for Shishkin, Ergashev scored an official knockdown in round two but replays indicated it was more of a push.

“He was very strong, but I was hitting him too much,” said Ergashev, who last fought on ShoBox in February and landed 53% of his power punches to Ramirez's 28%. “I’m happy with the stoppage. This is a sport. Yes, I wanted the work, but the referee did the right thing.

“I fought in a very explosive and aggressive style because I wanted to put on a good show for the fans,” said Khegai, a former Muay Thai fighter of Korean descent. “I kept putting pressure on him to keep the fight exciting.”

Khegai, ranked No. 5 by the WBO and No. 7 by the IBF at 122 pounds, controlled the fight from the outset and fought an aggressive and accurate fight landing 44.7% percent of his total connects, far above his 28.5% CompuBox average. Tikhonov was more active (68.5 punches per round to Khegai's 62.3) but his inaccurate jabbing (37 of 285, 13%) and softer punches hurt him in the eyes of the judges.

“I’m not surprised he took all those hard punches,” said Khegai, fighting for the third time on ShoBox. “I studied him before the fight and I was ready for him to be that tough. I would give myself an eight for tonight’s performance. I did most things well. Next, I want to fight 10 or 12 rounds against a strong opponent to really show what I can do.”

The telecast featured highlights from two undercard bouts including fighters who will appear on SHOWTIME in the coming weeks. Philadelphia’s highly touted undefeated welterweight prospect Jaron “Boots” Ennis recorded a first-round TKO against Franklin Mamani (23-6-1, 13 KOs). Ennis (23-0, 21 KOs), who will look to return this Fall in a televised bout on SHOWTIME, came out strong against Mamani, who suffered an injured left shoulder and didn’t answer the bell for the second round.

Undefeated welterweight prospect Brandun Lee (16-0, 14 KOs) of La Quinta, Calif., scored a quick first-round TKO against opponent Francisco Medel (13-21, 8 KOs) as the fight was called after two knockdowns just 31 seconds into the first round. Lee will face an opponent to be named on a ShoBox: The New Generation tripleheader on Sept. 20 from La Hacienda Event Center in Midland, Texas.

Friday’s fights were presented by Salita Promotions in association with Holden Productions.

The full telecast will replay on Monday, Aug. 26 at 10 p.m. ET/PT on SHOWTIME EXTREME and will be available on SHOWTIME ANYTIME® and SHOWTIME on DEMAND®.