SERGEY KOVALEV KNOCKS OUT ANTHONY YARDE IN 11TH ROUND 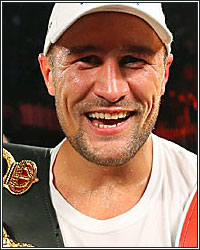 Moments ago at the Traktor Sport Palace in Chelyabinsk, Russia, WBO light heavyweight champion Sergey Kovalev successfully defended his title, knocking out game challenger Anthony Yarde in the 11th round. Although Kovalev controlled the action behind a crisp jab, Yarde made adjustments that kept him in the fight and had the champion in serious trouble in the 8th round.

Unfortunately for Yarde, fatigue quickly set in for the inexperience challenger, allowing Kovalev to pick him apart with combinations down the stretch. Credit to Yarde for battling on, but in the end, a Kovalev jab would put him on his back for good in the 11th, too exhausted to even attempt to get up.