BRANDUN LEE: "I'M READY TO SHOWCASE MY SKILLS AND LET THE BOXING WORLD KNOW WHAT I BRING TO THE TABLE" 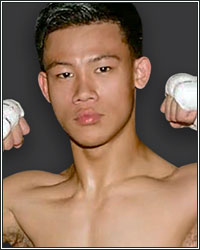 Undefeated welterweight prospect Brandun Lee has finished an abbreviated training camp as he travels to Midland, Texas where he will make his television debut against Nicaraguan Milton Arauz in the eight-round opening bout of a three-fight ShoBox: The New Generation telecast on Friday, September 20 live on SHOWTIME (10:30 p.m. ET/PT) from La Hacienda Event Center.

Tickets for the event, which is promoted by Banner Promotions and Thompson Boxing in association with GH3 Promotions, Garcia Promotions and Now Boxing Promotions, are priced at $120, $100 and $80 and can be purchased online at www.haciendamidland,com or by calling 432-563-3737.

Here is what Lee had to say:

Q: You are trained by your father Bobby, how did you two adjust to such a short training camp having just fought last on August 23?

Lee: “It’s really just been some bag work and staying loose. We’ve thrown in some sparring. At this point it’s really about maintaining your conditioning, but at the same time you can’t overwork it. We’ve been getting in some good work at the Indio Boys and Girls Club, which is really turning into a hotbed for upcoming boxing prospects.”

Q: Who have you been sparring with recently?

Lee: ‘Thomas Dulorme, JoJo Diaz and Shakhram Giyasov, who goes by the nickname ‘Wonder Boy’. He was a welterweight Silver Medalist in the 2016 Olympics in Rio. It’s mostly been Dulorme and ‘Wonder Boy.’”

Q: You are in a scheduled eight-round fight, are you prepared to go the distance?

Lee: “I’ve never done it, but I’m looking forward to it. I have knockout power, but I’m ready to showcase my skills and let the boxing world know what I bring to the table.”

Q: You have sparred with Mikey Garcia, Devin Haney and Mauricio Herrera, but you have a good story about sparring Timothy Bradley Jr., the former five-time world champion.

Lee: “Yeah, it was different for sure. I was just an amateur and it’s totally different sparring a pro, especially someone like Tim Bradley. We worked out and it was of course an honor. The story was that he ended up calling me a few days after sparring and asking how I did something. It involved some foot movement, I think. It was just strange having this world champion ask for my advice on something. I’ve seen Tim around town since then. He gives me great advice. He says, ‘Keep it up. Stay in school, and don’t get in trouble.’ Just follow your dreams. What he did in boxing was awesome, but I want to create my own legacy.”

Q: What do you know about your opponent?

Lee: “I know he’s strong, he’s rugged. He loves to throw body shots. I read in an article that this is his first time in the United States. So, I know he wants a fight and he will bring his all.”

Q: Have you visualized fighting on national T.V. for the first time?

Lee: “Of course. I’m only 20 years old and I’m extremely honored and grateful to [manager] Cameron Dunkin and SHOWTIME. But this is only the beginning.”

Q: What do you do when you are not in the gym training?

Lee: “I like to hike. I’m a big food guy. When I’m not in training. I enjoy trying new food, but my favorite is pizza and wings. I’m a full-time college student as well but boxing is my main focus. It’s all I want to do and it’s all that matters.”

Q: What courses are you currently taking?

Lee: “I’m at College of the Desert and have 12 units, including statistics, environmental geology, and public speaking.”

Q: The public speaking will serve you well speaking to the media.

Lee: “Yeah, that’s why I’m taking the class. It’s good practice for all my future press conferences. I love talking to the media.”