JOHN MOLINA JR. READY TO "BRAWL" WITH JOSESITO LOPEZ: "THERE'S NOTHING NEW THAT JOSESITO CAN DO TO SURPRSE ME" 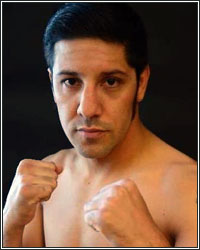 "Me and Josesito are both guys who took tough roads to get here and the fans love us because of what we always put into the ring. We leave everything in there and that's why the fans know this fight is going to be one to remember.

"I've been doing this a long time and I've seen just about everything in the sport. There's nothing new that Josesito can do to surprise me. At the end of the day, this is a fight. We're well prepared, and I know he is as well.

"Having to pull out of my previously scheduled fight left me with a burning desire inside. I was upset. I know I don't have to prove to the fans that I'm gritty, because they've seen what I do in the ring. But it still leaves a bad taste in my mouth. When this fight presented itself, I jumped at it.

"It's huge to be on this platform and it gives me a great opportunity to continue fighting for my family. It's motivating and it makes me want to give the fans everything they deserve.

"This whole card is stacked from top to bottom. It's all action and me and Josesito are going to give everyone a great Southern California brawl."