JOSESITO LOPEZ WARNS JOHN MOLINA JR.: "I'M READY TO GO THROUGH ANYTHING TO GET THIS VICTORY" 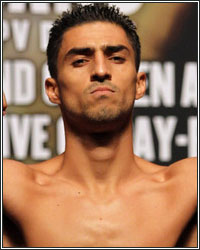 "A win opens up more opportunities. I've proven myself and I continue to prove to everyone that I belong in the ring with top fighters. I've given elite fighters some of their toughest fights. You're always in for an exciting fight with me.

"I don't underestimate John Molina Jr. I've seen him a lot throughout the years, just like I'm sure he's seen me. We know each other quite well, so the fans are in for a good one. We've both proven we have the heart and the will, now we have to prove it against each other.

"My preparation has given me confidence heading into this fight. I know that I can be in there with the best of them. I feel great physically, I'm focused mentally and those tough rounds against a fighter like Keith Thurman in my last fight definitely boosted up my confidence. I have to showcase everything on September 28.

"It's going to be an exciting fight. I've prepared for battle and I'm going to win. I'm ready to go through anything to get this victory.

"I don't feel pressure to make this an action fight, because this is one of those matchups where it's just going to happen naturally. This is an evenly-matched fight and everyone is going to get their money's worth.

"I don't really have a prediction but I think Spence vs. Porter is going to be an exciting fight. Spence has shown a lot but Porter is tough dog and I'm sure he's going to give him everything he's got. The entire card is action. It's a can't miss pay-per-view from top to bottom and I'm excited to be a part of it."