SAVANNAH MARSHALL ON CLARESSA SHIELDS: "OUR REMATCH COULD 100% BE THE BIGGEST FIGHT IN WOMEN'S BOXING" 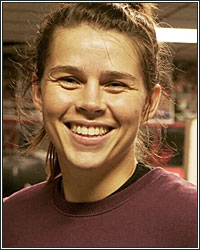 Savannah Marshall is characteristically cool when summing up her face-to-face meeting with rival Claressa Shields.

Marshall (8-0, 6 KOs) famously beat Shields (9-0, 2 KOs) in the amateurs and with the American having since turned professional and become unified middleweight champion, a colossal rematch looks on the cards.

The pair both attended Saturday night’s #MTKFightNight at York Hall and Marshall wore a contented smile as Shields conducted an iFL interview with enthusiasm.

Reflecting on their subsequent face-off, Marshall said: “To me, she’s just another future opponent so it was no biggie but I enjoyed it and it amused me.

“I knew she was going to be at the #MTKFightNight and therefore I wasn’t surprised to be asked to do a head-to-head with her.

“I’ve seen so many emotions from Claressa over the fight we had but she seemed pretty mellow about it on Saturday.

“Our rematch could 100% be the biggest fight in women’s boxing but I don’t care about the location. Hartlepool Social Club would work for me!

“I know she is keen to stress she was younger when we first fought but I consider myself a late bloomer in terms of my strength too. There have been massive improvements in my power.”

Marshall was at the event to support close friend Chantelle Cameron, who blasted to WBC world super-lightweight mandatory status while Shields watched on from ringside with sparring partner Hannah Rankin.