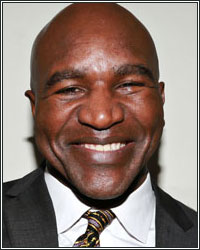 Hall of Fame Boxing Champion Mike Tyson has teamed up with leading network PodcastOne in a new deal to help expand the show’s reach. The move will allow Tyson to leverage the power of connection, community, and engagement that the PodcastOne network uniquely offers hosts and fans alike. In the weekly show, Tyson pours his soul into conversations with fascinating minds, celebrities and athletes in a studio full of smoke, along with his cosmic millennial sidekick and former NFL star, Eben Britton.

His first episode on the network features his most memorable former rival, legendary boxer and Olympian Evander Holyfield. During the interview, the two discuss Holyfield’s upbringing and introduction into the art of boxing at a young age, along with how his mother was an inspiration, and whose words helped craft his career. Additionally, they recall their infamous 1997 fight that lead to the incident where Tyson bit a chunk of Holyfield’s ear off. They share what life has been like since, including Holyfield’s process in forgiving Tyson.

Below are excerpts from the revealing episode, available now on Apple Podcasts and PodcastOne, with new episodes every Monday.

Holyfield: “Life – life’s always been great’ cause the whole big thing is, I made this plan that I will forgive, ‘cause that’s all people ask me - ‘How in the world could you forgive somebody?’ I say, ‘Everything that ever happened, at some point of time, I did it.’ I said, now, ‘Mike bit me.’ I said, now, ‘I bit somebody too!’”

Tyson: “Thank you for forgiving me. Thank you, thank you.”

Holyfield: “It just went on TV... Yeah, I bit a guy in the shoulder. He - he dropped me! I didn’t know when you have a concussion, you’ll bite too! The guy dropped me, and I got – I got really - swinging. He grabbed me, and I bit him right on the shoulder. Like this had [mumble] Mike bit me -”

Holyfield: “I remember Mike - Mike said on TV, and he said, he said, ‘Well, Evander, he liked being around white people because he liked for them to tell him what to do. Like this.’ And I’m like, ‘It was an A-B-C fight.’”

Holyfield: “Yeah! My mama – my mama didn’t know nothin’ about boxing, but she said, ‘Look, don’t let him get in your head and get you to be like him. He wins the fight if he gets you like him.’”