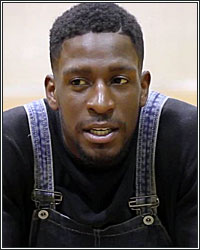 "I signed with Golden Boy in 2018 and I was supposed to get six 4-round fights within a year and I only fought once at MSG in January 2018. This was all in writing. There were things going on with the matchmakers and for some reason, I couldn’t get a fight. I don’t know what the reason was. There were rumors that there were people talking down on me, saying they were wasting their time...I felt like I was put in that situation intentionally. Around that time, I wanted my release and I didn’t feel like they were taking me seriously," stated prospect Cornell Hines-Bey, who had a lot to say about his experience with Golden Boy Promotions and why he asked for his release. Check it out!

JR: Before we get into it, a lot of people would’ve probably given up with all the politics in boxing that you recently had to go through. Things didn’t work out with Golden Boy promotions. You had a loss in your last outing, but you were offered an extension. From what I’m hearing, it was you that wanted your release. Can you speak on why it didn’t work out?

CHB: I signed with Golden Boy in 2018 and I was supposed to get six 4-round fights within a year and I only fought once at MSG in January 2018. This was all in writing. There were things going on with the matchmakers and for some reason, I couldn’t get a fight. I don’t know what the reason was. There were rumors that there were people talking down on me, saying they were wasting their time. I don’t know if that’s true or not. All I know is that the contract said six fights and all I got was one fight. My second fight was with Eben Vargas [August 2019] and it’s been over a year. Vargas was a 10-0 fighter; I was only 5-0. I’m looking at all the other prospects and they’re not fighting nobody 10-0; they’re fighting guys that are something like 3-13.

JR: So you’re saying that they basically didn’t build you up fairly as a prospect and they probably should’ve gave you someone that wasn’t undefeated at 10-0, correct?

CHB: I’m not going to say Eben Vargas was all that. I went the distance and didn’t get the nod. That was my first 6-rounder and he’s already been through three 6-rounders and had more experience. We were fighting outside for the first time on his side of town, so it was a lot of disadvantages. The fight was August 30th and was supposed be in early July. I was told the fight was off when I was already training 7 weeks in July, and 3 weeks before the fight, we weren’t fighting at all against anybody. I felt like I was put in that situation intentionally. Around that time, I wanted my release and I didn’t feel like they were taking me seriously. For every fight I didn’t get, I was supposed to get paid and some more stuff. So instead of going to court, I just wanted to get released. So it’s like 3 weeks now and now they say I’m fighting Eben Vargas. Why is there a fight now all of a sudden? After that fight, I got offered to fight a guy in Ireland that was 8-0 in December and they wanted to give me a new deal after that. I still asked for my release and they sent it over. There was no point of me even doing that.

JR: I know there were some things going on at Ferebee Hope [gym]. It’s not the safest place to be with robberies happening at and around the gym. I believe there’s been closures there at times also. You’ve switched gyms and trainers. Is this part of the reason?

CHB: That’s part of it. I never saw myself training nowhere else. Too Sharp [Mark Johnson] is family to me. Too Sharp and I was talking one day at the gym and he basically said, “I know it’s a lot of people in your head right now and I would’nt mind if you went somewhere else to get some training.” I took it and thought about it, but he brought it up again. I took his advice and chose Upton Boxing [Calvin Ford and Kenny Ellis]. We’re still on good terms.

JR: Upton is about 45 minutes away from you and they seem to busy with a lot of pros and amateurs. Do you feel that you’re going to get enough work and attention to succeed there?

CHB: That’s the one thing I love about it; there’s no favoritism and everybody is getting the attention that they need. Everybody gets genuine love and they tell you like it is; same way Too Sharp works. If you don’t look good, they’re going to tell you that you look like shit and that’s the kind of coaching I like. I feel like I’m at home there.

JR: Based on everything that has transpired, I know you’re taking your time with everything. What direction do you want to go regarding fights?

CHB: Calvin [Ford] wants me to try to fight this month and is looking to put me in the best position. My last fight was at 146 pounds and I’m actually going back to 140 pounds. Calvin and Kenny have been teaching me lots of things. Calvin and Too Sharp are similar in breaking things down in a way I can understand it.

JR: Do you think it’s a possibility in the future that you can have both Calvin and Too Sharp in the corner and that they’ll work together?

CHB: That’s the goal. I mean, that would be great. Of course I’m going to work with Calvin and Kenny. I want to also pay homage and give gratitude to Too Sharp. Too Sharp and I never had no contract and everything was really just off of a handshake. I paid him when I paid him; it was never a contract. Even though I’m not working with him now, I still plan on paying him for all the love that he showed me.

JR: What can promoters and people expect from you and what are they getting from Cornel Hines?

CHB: They’re going to get some slick defense and some excitement. It’s never going to be a boring fight at all with me.

JR: Anything else you got to put out there before I let you go?

CHB: If Eddie Hearn is reading this, that’s where I’m trying to be right now. I’m at @cornelltheboxer and cornellhinestheboxer.