AMIR KHAN FEEDING 10,000 FAMILIES IN PAKISTAN DURING PANDEMIC; FOUNDATION HELPING THOSE IN NEED

NOTES FROM THE BOXING UNDERGROUND: WILDER-FURY 2 IS A VERY GOOD THING 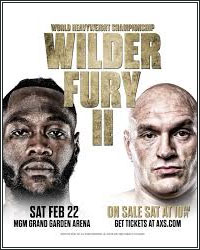 But, putting aside the talk and the headline-fodder, Wilder-Fury 2 is really, really good for boxing.

A lot has been made about this Fox-ESPN cooperative effort being a beacon of hope for the sport, showing the world that boxing companies CAN work together to make big fights. The reality, though, is that the framework for the Wilder-Fury rematch was pretty much in place well before Fury became ESPN's $100 million man. Still, ESPN has the bucks to fight pre-established plans and they have Bob Arum's devious brain at their disposal to boxing-spin a Wilder-Fury fight into oblivion. The upcoming part two of the heavyweight rivalry could've been stepped on and stopped. Thankfully, both sides saw the huge potential and kept moving forward.

Competitively, it's always a good thing when two of the undisputed top three in a division can get together and settle things in the ring. The grey cloud around the silver lining here is that the third name in the top three-- Anthony Joshua-- may remain odd man out in a could-be round-robin. If Wilder beats Fury, there's too much bad blood between Team Wilder and Team Joshua to expect cooperation any time soon. If Fury beats Wilder, there's also no guaranteed easy road to Fury-Joshua. And if Wilder-Fury 2 is remotely close, expect a part 3, thereby leaving Joshua out of the competitive loop for at least another year or so.

But, despite the possibility of turds being dumped into the punchbowl later on, this coming Saturday is as close to a kumbaya moment as we're probably ever going to get again in boxing, at least in this current business environment-- Best fighting best (or two of the three best fighting one another) in a cross-company event that has been very well-promoted.

All this harmony and positive movement is kind of scary, though. Because, now, the pressure is on for it to actually succeed. If the 2 million buy mark-- the bar set by Arum-- is the measure of success or failure, there's just no guarantee that we'll get there, even under the best of circumstances. Boxing has really, really dropped the ball when it comes to making people care about its product and there's no guarantee that the world will respond this one time they do have their shit together.

It's rare that I actually endorse a pay-per-view, but if there's ever one to buy, it's this one-- the one where everyone is actually trying to do this boxing event stuff right.

-- Ryan Garcia is definitely a star-in-the-making, but DAZN and Golden Boy are dropping the ball with him. He should be a mainstream SUPERstar-in-the-making. A fight like last Friday's, where he one-punched Francisco Fonseca into oblivion in the first round, should've been on a free YouTube stream, where millions of swooning girls and hipster boys would be watching, not behind a paywall playing to 50,000 jaded old man fight fans. Promoters generally lose money on these fights where stars are being built, anyway, so why not make these showcase bouts actual showcases? I mean, I know the answer to that-- DAZN is paying a pretty penny to have exclusive dibs on Garcia and Golden Boy is eager to take that easy money rather than do the hard work of having to actually promote such an event and peddle sponsorships, endorsements, and advertising to make money on the show. But DAZN would be wise to have some sort of outreach effort to get their young fighters-- especially Garcia (and to a lesser extent Vergil Ortiz and Devin Haney)-- to the places where new fans can be made and, if all is done right, eventually brought to the paywall.

-- Speaking of Garcia, Golden Boy is doing a really good job of matchmaking for a young, still-vulnerable fighter being built as a "next big thing." His opponent on Friday, Francisco Fonseca, was a perfect example of that-- a solid, but second-tier fighter with some big names on his resume, moving up in weight. On paper, Fonseca had a chance...but only on paper. Good matchmaking for prospects creates the illusion of invincibility and buys time for the young fighter to further develop in the gym, beyond the glitz. If Garcia does go ahead and fight Jorge Linares, as everyone on the DAZN telecast indicated he would, it would be a pretty smart breakthrough fight for the 21-year-old kid. Linares still has his name, his reputation, and the framework of skill set, but he's looking increasingly vulnerable and may go down heavy if tagged in the right spot by even a moderately heavy puncher.

-- I wasn't expecting IBF super middleweight champ Caleb Plant to NOT beat Vincent Feigenbutz last Saturday night on Fox, but I was expecting a bit more of a tussle. The fact that it was pretty much a shutout is a testament to Plant's abilities. Admittedly, Feigenbutz was no Andre Ward or even David Benavidez or Callum Smith for that matter, but, still, Plant looked really good with what he was able to do. I'll fully admit that I'm a Caleb Plant mark-- I just fully buy into his skills, dedication, attitude, and the weight of his entire backstory. But in a sport that is increasingly cynical, I recommend hitching up your cart to his bandwagon because this guy has old school skills and he's got "it" as well.