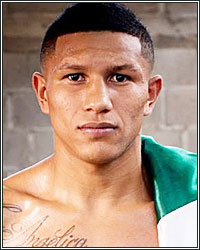 Berchelt (38-1, 34 KOs) knocked down Valenzuela (21-14-4, 16 KOs) in the opening round, then continued with a body-head assault until the referee stopped the contest.

It was a furious, sustained offensive output for Berchelt, who landed 201 of 321 power blows (62.6 percent connect rate). Valenzuela landed only 37 of 305 total punches. For Berchelt, he can look ahead to the potential all-Mexican title showdown against Oscar Valdez, the former featherweight world champion who is the WBC's No. 1 contender at super featherweight.

"Now what follows is the expected fight against Oscar Valdez," Berchelt said. "Every fan wants to see that fight, and we are ready for that war.

"I felt great, but the altitude Mexico City hit me a little bit. It is not easy to fight in Mexico City, but thank God we got the victory. Eleazar is a tough fighter. He endured everything I threw at him. He gained my respect. My experience as world champion pushed me forward."