THE FLAW IN THE MIKE TYSON VS. ROY JONES JR. PPV PLANS 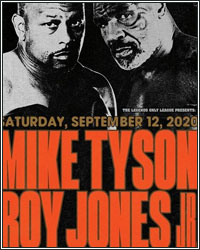 I guess it could be argued that THE fatal flaw in the September 12 Mike Tyson-Roy Jones Jr. PPV plans might be the $50 price tag reportedly affixed to that mish-mosh of 90's pop culture and vaguely fight-related "entertainment."

But the second fatal flaw can be found on the undercard.

Adding the bout between YouTuber Jake Paul and former NBA star Nate Robinson has just opened the door to bad, bad things for the promotion.

Let's be real here, nobody over 17 (unless they've been featured on Dateline NBC's To Catch a Predator) has any knowledge or interest in the world that Jake Paul lives in. Clearly, the Tyson-Jones PPV organizers added the popular YouTube personality in an effort to draw in a younger audience and get a ton of free publicity throughout YouTube and social media.

That free publicity part may happen. But what may also happen-- and is likely to happen-- could pretty much destroy the commercial viability of the show.

Along with Mr. Paul and any added influx of young, internet-savvy social media-riders comes mass piracy.

Back in August of 2018, Paul fought fellow YouTuber KSI in a PPV tussle on YouTube. Despite the moderate price tag of $10 and the fact that the show was loaded with a ton of YouTuber vs. YouTuber exhibitions, most young people who watched didn't pay. Illegal streams popped up everywhere, including on YouTube's own platform. While a reported 800,000 viewers DID pay, an estimated 1.2 million watched pirated streams on YouTube streaming rival Twitch, alone, and countless others watched via illegal streams hosted on hundreds and, perhaps, thousands of other sites.

The kids beat the technology and the efforts to keep that technology bound to one spot for sales purposes. When one stream did get forced down, three more sprang up to replace it. The young people, who've lived this robin hood streaming existence since they were old enough to hold a phone, were too much for the suits behind the telecast. It was no match.

Expect that to happen to Tyson-Jones if the kids are brought under this circus tent.

With a main event targeting an older audience that could be at least partially befuddled by the process of bringing an internet stream to the big screen TV, where they're accustomed to enjoying their sports content, frustration may erupt.

Maybe price will be the issue in these hard economic times. Maybe accessibility. Maybe both.

Whatever the case, that frustration may push possible buyers into likely searchers for pirated streams. And, with the kids locked in for the Jake Paul fight, the internet will be absolutely packed with them. With or without the kids chumming up the pirated waters, bootleg streams will be plentiful for Tyson-Jones, anyway. Adding a legion of quick, knowledgeable, and happy-to-scam young people to the picture will be like dousing a scuba enthusiast with seal blood before a swim in shark-infested waters.

With video/music-sharing service Triller putting more than $50 million into the show and the main-eventers reportedly getting a cut of the PPV money, there could be little room for error when it comes to incoming revenue. Multiple leaks in the hull of the boat could sink the ship fast.

Merchandising could possibly save the profit margin for organizers. Tyson-Jones t-shirts, sweatshirts, and other items-- marked up to a ridiculous extent-- might sell well among old school boxing fans. Maybe that will help make up for some of the losses on the actual show. But maybe not.

September 12 should be an interesting day online. If Triller is run ragged chasing down illegal streamers and grabbing at figurative dollar bills flying out their figurative window, they only have themselves to blame.