OSCAR DE LA HOYA: RYAN GARCIA-GERVONTA DAVIS TALKS ARE AND ARE NOT HAPPENING 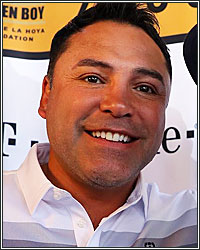 Depending on which night you grab Oscar De La Hoya, Ryan Garcia-Gervonta Davis fight negotiations are either inching along in a positive direction or absolutely, positively not happening at all.

Last Friday, at the Vergil Ortiz-Michael McKinson weigh-in, a semi-lucid Golden Boy Promotions founder and CEO told FightHubTV: "Look, we're talking. We're talking, so, yeah, it's a great start. To get to talk to the other side is a great start. We want the fight. That's the bottom line."

However, on Saturday, after Ortiz obliterated McKinson in nine rounds, a significantly less lucid De La Hoya told ESNEWS: "Hey, we’re trying to get a hold of Tank’s side. We don’t know who to talk to. Nobody picks up their phone, nobody calls back…”

So..yeah...The Golden Boy continues to be an enigma wrapped in a riddle draped in fishnets…

Of course, such puzzling contradictions are nothing new to a De La Hoya who often seems to be flailing at a hard-charging, pressure-fighting reality. Just this past June, when asked about his fighter Jaime Munguia’s opponent Jimmy Kelly, Oscar confessed to not knowing “who the hell he is” and then, one day later, in assessing Kelly as “the real deal,” claimed to have been studying Kelly “for awhile now.”

It does make infinite business, however, for both sides to LOOK interested in this fight, especially for Garcia, who had been blasted for his inactivity and a perceived wavering interest in boxing.

Although De La Hoya often struggles with keeping stories straight and keeping his feet firmly on the canvas of reality, he’s been around the boxing business end of things long enough to pick up, through osmosis, some of the cons and hustles of the trade. And chief among those cons and hustles is the infamous “We want him, but he won’t fight us” narrative ploy perfected by Oscar’s former promoter Bob Arum.

Arum, though, never played both sides of the hustle, simultaneously, glassy-eyed and jabbering contradictory nonsense that makes one go back and double check if what they heard was actually what they heard. Just as styles make fights, I guess styles make promotional techniques.

But, really, this kind of stuff is hardly promotion at all. If I’m being exceedingly kind, Oscar’s lack of congruence is simply muddying the water, making it so that nothing can come from any of this. Unless someone really savvy and grounded is behind the scenes working to make things happen at Golden Boy (which is most likely the case), King Ry vs. Tank talks will never get off the ground.

Of course, someone “savvy and grounded” would know that making King Ry vs. Tank right now, with the business impediments in place and the money to be made via other routes, is not a smart bottom-line decision.

But, hey, look on the bright side...we still have Oscar saying Oscar-like things to the media. Look. Point. Shake your head. Laugh. Watch as the naive and boxing-illiterate take him at his word because he’s “The Golden Boy.”