NOTES FROM THE BOXING UNDERGROUND: TEOFIMO LOPEZ -- THE LAYOVER 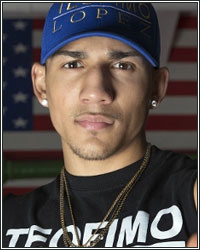 Was it the Takeover, the Takeback, or the Resurrection? Honestly, I lost track with all the branding attempts made for Teofimo Lopez’s comeback.

For me, Saturday’s bout in Las Vegas against Mexican Pedro Campa was more like the Layover for a returning Lopez, a stop between destinations where the only intrigue came in how long that layover would be.

Top Rank is the absolute best at safe matchmaking that appears dangerous and their choice of Campa as Teo’s comeback opponent was superb. The native of Hermosillo, Sonora was tough, game, and flung his fists like he COULD do some real damage. But, really, he never had a chance. He was just too slow-footed, too slow-fisted, and too all-around pedestrian for a fighter in Lopez who is special in several ways.

From the very first exchange of the fight, it was clear that Lopez would be too fast and too multi-dimensional. By the fourth round, Campas’ slim chance of landing something big and script-flipping had dissipated entirely. By the sixth round, the bout was more target practice than prizefight. And, in the seventh, Lopez dropped a battered and busted-up Campas, leading to a stoppage by referee Tony Weeks.

So, the question AFTER the fight is now the same BEFORE the fight (because we really didn’t learn anything on Saturday, other than that Lopez has not completely fallen apart under the weight of his own promise)-- what next for Teofimo Lopez?

The 25-year-old has insisted that 140 is his new home and that all comers and challengers will need to meet him there. And that will be the case, until he outgrows 140 in a couple years.

Junior welterweight, right now, is not exactly brimming with elite-level talent or even high-end, multi-dimensional, long-term world stage players. Josh Taylor is “elite,” but he’s shedding belts like the space shuttle dropping rocket boosters back down to Earth upon launch and may be officially a welterweight in a matter of months. Regis Prograis is very much a high-end talent. Jose Ramirez, Jack Catterall, Jose Zepeda, Arnold Barboza, and Subriel Matias would all make for compelling clashes. Gary Antuanne Russell could also be a real challenge under the right conditions.

There are other worthwhile challenges as well. But the really big-ticket foes are still at 135 (or just newly arrived FROM 135)-- Ryan Garcia, Gervonta Davis, Devin Haney, and a possibly revenge-minded Vasiliy Lomachenko. And it’ll just be a matter of time for all of the above, with the likely exception of Lomachenko, to be firmly within the 140 lb. limit.

Probably a lot of waiting around, fighting guys ALMOST worth the time, but not the big names. His Lomachenko fight saw stars aligning at the right time and the opportunity almost literally fall into his lap. The closest to that happening for him is a Taylor title bout– if Top Rank, which promotes both Taylor and Lopez, gets everything put together just right and very, very quickly. Everything else “big” for Teofimo will require a trudge through the netherworld of cross-promotional, cross-network, cross-platform negotiations (except for the now-Top Rank co-promoted Haney, who will be hard to wrangle away from doing his own thing against lots of someone elses).

In the meantime, though, while business is working itself out, Lopez IS back and he looked pretty good, albeit against someone chosen to make him look pretty good. And, although his post-fight celebrations gave off an almost desperate “look at me being BACK and totally mentally healthy, not at all damaged” vibe, it’s true that even a Teofimo Lopez running at 75%, and wading in delusion is better than almost anyone else in his weight range.

That’s been clearly evident for awhile, especially in his lone defeat last November to George Kambosos where he dropped a nip-and-tuck split decision to the Australian while dealing with distraction, delay, and a COVID-related, breath-crippling condition that doctors say could’ve, literally, killed him during the fight.

This whole package makes Lopez one compelling fucker and someone worth watching for any number of reasons. Although Saturday’s stomping of Pedro Campa was little more than a layover to future destinations, it’s still good to have him back in the airport.