JAMES TONEY: "ALL RANDY GOTTA DO IS SIGN THE CONTRACT AND HE'S GETTING KNOCKED OUT" 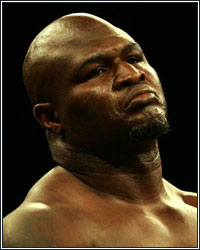 "If Randy Couture want it, he can get it! It ain't no thang to me," stated future boxing Hall of Famer and newly-signed UFC heavyweight James Toney as he shared his thoughts on a possible showdown with former UFC heavyweight champion and Hall of Famer Randy Couture. The moment Toney signed with the UFC, Couture expressed his eagerness to welcome the boxing icon to the Octagon. Now, that match-up may become a reality as a potential clash between both fighters is in the works when the UFC makes it's debut in Boston on August 28 at UFC 118. "It ain't no thing but a chicken wing. All Randy gotta do is sign the contract and he getting knocked out too! I ain't playing with him," continued Toney, who has no problem whatsoever facing the MMA legend, despite the fact that Couture's strength is on the ground.

Although Toney, who officially signed with the UFC back in March, has yet to actually step inside the Octagon, he assures everyone that he's not taking his MMA career lightly. "Everybody thinks this is a goddamn game, but this ain't no game for me! I'm going to be ready! Whatever he wants to do, we can do," Toney added. "If he stands up with me, he's getting knocked out and if he takes me to the ground, he's still getting knocked out."

Toney is adamant that his conditioning, which has long been a concern in regards to his boxing career, will not be a factor anymore for any of his upcoming fights, whether it's boxing or MMA. "I'm busting ass every day doing my thing. Trust me, if you don't hear from me, know that I'm keeping busy. Whenever the fight happens, I'm going to be ready guns loaded," he stated.