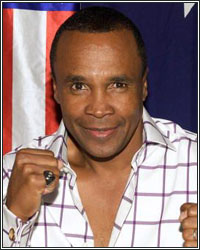 "I think Pacquiao gives everybody a challenge. You know, Pacquiao is who he is. He's a champ and the same goes for Mayweather. They both have that ability and that confidence and the talent to compete in any era...If I had fought them if I was in that era, I would have done my due diligence, my homework, and studied them and got to know their idiosyncrasies and things that bothered them; I would go through the whole nine yards of trying to find the best way, the most effective way I should say, to beat those guys. Those guys are incredible fighters, incredible champions and incredible individuals," stated Hall of Famer and 5-division world champion Sugar Ray Leonard, who took a break after finishing a round at the 2011 Bob Hope Classic golfing tournament to speak with FightHype.com about his upcoming autobiography, his thoughts on Mayweather and Pacquiao, and much more. Check it out!

BT: Yeah, the other day I saw some video of you knocking down a 15-footer. You looked like you had some pretty good form there. Have the skills inside the ring crossed over to the golf course?

SRL: Um, I think there's some terrible confusion there (laughing). To say there's a correlation or some parallel, I don't think so, but then again, you know what? Because you gotta be optimistic and you gotta really do your homework and your training, and the focus, I guess those things do reflect on playing the game.

BT: What kind of handicap do you play with?

BT: Oh yeah? Have y'all played before?

SRL: We've played a couple times. He always beats me and takes my money.

SRL: I'm not laughing about that. It's not very funny (laughing).

BT: That's okay. You're getting all the tips you'll need from all the pros at the Classic.

SRL: Yeah, no question about that.

BT: Is this the first time you've played in it?

SRL: It's my first time. I was just a bit too intimidated by the pros and the guys who have single digit handicaps. I just didn't want to get out there and, you know, be a comedian. But this particular time, I said, "Yeah, I'll play in the Bob Hope." And I tell you what, it won't be my last.

BT: What's that experience like to participate in a prestigious golfing event like that where so many top celebrities from different genres are involved?

SRL: You know, it's all about having fun and playing for a cause. It's fantastic.

BT: Overall, how's the competition been? I'm sure you've been sizing up some people.

SRL: Well, I always size people up, but it's taken so much out of me trying to focus on these holes that I kind of burned out by the 18th. I hit a great pitch shot on the 18th and had a really short put, but I put too much pressure on myself and I missed it.

BT: Awwwww. So how'd you do overall today? How'd everything turn out?

SRL: Fantastic, you know? Just enjoyed the family. We were in Las Vegas for New Year's Eve and we saw Cold Play, Jay-Z and Beyonce; it was fantastic.

BT: So outside of this tournament, what's the latest going on with Sugar Ray Leonard? I know you do a lot of charity work and motivational speaking.

SRL: Yes I do and I'm just finishing my book. My autobiography comes out in June; June 7th actually. It's been almost a 2-year project and it's been an amazing journey to revisit the good time and bad times and wonderful times. Thank God there were more wonderful times than bad times, but, you know, it was therapuetic.

BT: Is that pretty much covering the span of your life from...

SRL: It is a must-read. I'm gonna read it again myself (laughing).

BT: (Laughing) Nothing wrong with that. You know Champ, I'm not going to ask you a silly question like whether or not you would beat a Pacquiao or a Mayweather because, in my opinion, I think it's pretty obvious, but just out of curiosity, if Sugar Ray Leonard was fighting either one of those guys, is there one particular one that might give you a more difficult challenge.

SRL: I think Pacquiao gives everybody a challenge. You know, Pacquiao is who he is. He's a champ and the same goes for Mayweather. They both have that ability and that confidence and the talent to compete in any era.

BT: Except they wouldn't compete against you, right (laughing)?

SRL: You said that (laughing).

BT: Well, that's my personal opinion, but I may be a little biased because I've always been a Sugar Ray Leonard fan (laughing).

BT: Is there anything you see about their styles in particular that you know you would've been able to take advantage of?

SRL: Well, not really. You know, what you see from the outside is not necessarily what you're going to experience on the inside. If I had fought them if I was in that era, I would have done my due diligence, my homework, and studied them and got to know their idiosyncrasies and things that bothered them; I would go through the whole nine yards of trying to find the best way, the most effective way I should say, to beat those guys. Those guys are incredible fighters, incredible champions and incredible individuals.

BT: You mentioned this era. Do you think fighters today are different than fighters of your era.

SRL: Each era is always different. There's always a difference, whether it's, you know, back in my era, there was a number of champions that could beat each other and have pick 'em fights and here you have two guys that pretty much dominate their weight divisions between Pacquiao and Mayweather. Not saying the other guy can't win, but for the most part, those two guys, you know, they dominate.

BT: Well Champ, I've kept you on too long already, but before you get out of here, let me just ask you, in your opinion, what was your toughest fight and what was your most complete fight?

SRL: My toughest fight, Tommy Hearns. The one I'm most proud of is my comeback against Hagler.

BT: If there was anyone, from any era, that you could have fought, but never got a chance to, who might that be?

SRL: There's no other fighter that I would have loved to...you know, I fought in my era and I'm proud of that.

BT: You and me both, Champ. Well let me let you get off of here. I really appreciate you taking the time to speak with me. Good luck in the rest of the tournament.

SRL: Thanks Ben. I appreciate it.