MIKE PASSENIER: "BADR IS BADR AND THERE IS NO ONE LIKE HIM...EVERYBODY IS WAITING FOR HIM TO PERFORM" 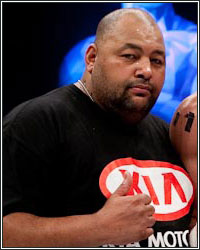 "Badr is Badr and there is no one like him, but I've never had any problems with him. He lets me be who I am and vice versa. We are two totally different guys with one interest: fighting and strategies...Like I said, he is testing the waters to see who'll come up or who'll come forward because maybe there is a trainer who we've overlooked who will see a great potential in him and steps up to the plate...I know he is a seller. He is a guy you would buy a ticket for or get out of your bed for. Nobody is going to the toilet or buying beer when he enters a press conference or the ring. No, everybody is waiting for him to perform," stated Mike Passenier, founder of the legendary Mike's Gym in Amsterdam, as he talked more about the prospects of former K-1 Heavyweight Champion Badr Hari making the transition to boxing. You don't want to miss what else he had to say. Check it out!

PC: Hey Mike, thanks for taking the time out to speak with me. How are you doing?

PC: A couple of years back, an unfortunate event happened. Your gym that you founded, the famous Mike's Gym in Amsterdam, burned to the ground. It's back up and running now, but how difficult was that for you to deal with?

MP: As a lot of people know, my gym is very important to me. I've worked very hard to get a gym like that, and also denied myself and my family a lot, so you can imagine that it was more than just a slap in the face. But as I've said, I took the 8 count, but my chin is on my chest and my guard is still up and I'll come back harder and stronger than before. And I did.

PC: You were in Japan when the incident took place. Who notified you of what had happened and what was your initial reaction?

MP: My wife called me to tell me that the next door neighbor was on fire. Later she called me and said that the gym was on fire too and that it couldn't be saved. At that moment, we were in a train station in Shinagawa on our way to train. I was shook, of course, and some tears came out of my eyes. Badr [Hari] and Melvin [Manhoef] were very supportive and asked me what I wanted to do. I told them there is nothing else to do but to train, so we took the train to the Gold's Gym and did some cardio and shadowboxing because the timing for pad holding was gone. It came back the next day though.

PC: I remember interviewing my man Paul Daley when it went down because he was training there. Does Paul still come through?

MP: Yes, Paul is coming for every fight, 7 to 10 days. In this period of time, I try to sharpen his stand-up and condition. He is fighting on the Bamma show in England on September 10th. Paul is a good guy and very loyal.

PC: You have a great crop of fighters, but I really wanted to talk to you about Badr Hari. He is one of the most controversial fighters in the world. Is it tough dealing with Badr from time to time?

MP: Well, like I always say, Badr is Badr and there is no one like him, but I've never had any problems with him. He lets me be who I am and vice versa. We are two totally different guys with one interest: fighting and strategies. We have become very fond of each other during the past six years, so for me, he isn't difficult for me. He is always nice, kind, generous, etc.

PC: I understand he is looking to make the transition into boxing. Is this something he has always wanted to do or did you guys look at the heavyweight landscape and say, "You know what..."

MP: Badr first started out as a fighter with good kicks and great knees. When we were starting to train, I just wanted him to box better so the knees and kicks would become even more dangerous. His love for the noble art kept growing and he started to box more and more. Now he is curious of his own fighting abillity as a boxer.

PC: When you look at the heavyweight division, obviously the Klitschkos are on top and their size has a lot to do with that. Badr Hari is no midget. 6'6" and about 245 pounds, right?

PC: Do you think he can make a smooth transition from kickboxing to boxing with the proper training and trainer?

MP: If he has a trainer who can trigger him, absolutely! He is determened and he is willing to give his all, so I don't see why not.

PC: If I read correctly, he has a fight with the "It's Showtime" organization in September. Is he looking to jump straight into a boxing gym following that fight to concentrate on boxing?

MP: The September fight is off. He is supposed to fight in October for K-1, but it isn't confirmed yet, so you never know, especially with a guy like Badr. If there is a gym who is willing to help him, or a trainer who can prepare him on the top level, he might be on the next plane after the Ramadan. But I think he wants to test the waters first and see who or where suits him the best.

PC: I don't want to throw any names out there yet as far as trainers, but you are eyeballing a few top flight trainers for him right now, right?

MP: Like I said, he is testing the waters to see who'll come up or who'll come forward because maybe there is a trainer who we've overlooked who will see a great potential in him and steps up to the plate.

PC: When will you be looking to get him into the States to begin training?

MP: I really don't know. Maybe in October, but you'll be the first to know.

PC: Badr is a tough guy, he has personality, he is a little bit crazy, and he can punch hard as hell. Sounds like everything the heavyweight division in boxing is missing.

MP: That's my opinion excactly; that's why I'm supporting him.

PC: Hell, I even think his temper and controversial nature is another element missing from the big men that needs to be rekindled into that division.

MP: I know he is a seller. He is a guy you would buy a ticket for or get out of your bed for. Nobody is going to the toilet or buying beer when he enters a press conference or the ring. No, everybody is waiting for him to perform.

PC: What type of relationship do you have with Badr; strictly trainer, father/son, big brother?

MP: We are friends with a lot of respect for each other and one shared passion for knocking people out.

MP: I am not sure, but I think something like over 120 fights with only 11 losses, so you can do the math. Most of the fights won by KO!

PC: I look forward to seeing him in a boxing ring because I think he is everything that the division is missing and I also think he is a dude crazy enough to take over the division because he's still young at 26 years of age. I wish you guys the best of luck. Is there anything else you want to say in closing?